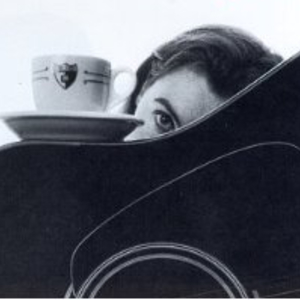 Having picked up a second-hand guitar in 1985, and learning from Calvin Johnson, Lois Maffeo's first band was Lumihoops, with Sharon Berman and Jan Brock. They only played live once, at the Smithfield Cafe, but can be heard on the Yoyo Recordings compilation Throw. Her second band, The Cradle Robbers, was formed with future The Spinanes member Rebecca Gates. They released one track on the compilation Red Hot + Bothered/Indie Rock Guide To Dating before disbanding.

She then teamed with drummer (and Yoyo Recordings founder) Pat Maley in a band named Courtney Love. There are multiple explanations for the name, but this was before Love herself became famous. The duo would release three well-regarded 7" singles and a few compilation tracks, but no albums. According to Pitchfork Media, Maffeo was an early acolyte of the indie pop movement, as women musicians traded tapes and created their own pop-oriented music culture, instead of blending in with boys in the punk or cock rock genres.
After this, Maffeo began her solo career as Lois (or, as she often says, The Lois). Maffeo lived in Mount Pleasant, Washington, D.C. from 1989-1995. She was resident in the neighborhood during the 1991 riot.
She generally appeared with other musicians playing drums and backup, but her group has changed over the years. Some may consider her an anti-folk musician, combining the ethics and politics of punk with acoustic instrumentation, though she generally disdains such simplistic labels. She has worked with musicians such as Donna Dresch, Molly Neuman, Elliott Smith, Brendan Canty and Heather Dunn. Her recordings have been produced and co-produced by artists such as Calvin Johnson and Ian MacKaye. She has occasionally sung with bands Dub Narcotic Sound System, Red Stars Theory and others.
After her return to Olympia, she joined Carrie Brownstein, now of Sleater-Kinney, in two bands. Their duo Tommy released one comp track, "Go Sonics". The Tentacles included Peter Momtchiloff, and released one single, "The Touch" (backed with "Louie Louie").
Her latest band is Owl & the Pussycat, a duo with Greg Moore, on the Kill Rock Stars label.