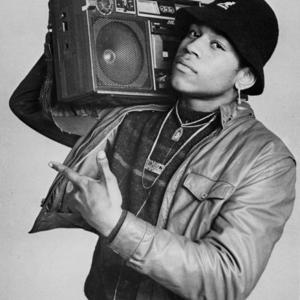 Born in Bay Shore, New York, and raised between St. Albans, New York and Hollis, New York in the borough of Queens. The only child of Ondrea (n?e Griffith) and James Smith, Jr. Smith is of both African American and Native American descent. He spent his youth singing in the church choir, participating in the Boy Scouts and delivering newspapers.
Def Jam released his first record, the 12" single "I Need a Beat" in 1983. The single sold over 100,000 copies. The success of "I Need a Beat" helped lead to a distribution deal with Def Jam and Columbia Records in 1985. Soon after, he dropped out of Andrew Jackson High School to record his debut album.

He is known for romantic ballads such as I Need Love and Hey Lover as well as pioneering hip-hop such as I Can't Live Without My Radio, I'm Bad, The Boomin' System, Mama Said Knock You Out, and 4, 3, 2, 1. L has also appeared in several films. LL Cool J is one of a few hip-hop stars of his era to sustain a successful recording career for more than two decades. He has released 12 albums and a greatest hits compilation so far, with his next album, Exit 13, set to be released in September, 2008. The album will be the last for LL's record deal with Def Jam Recordings, a deal which has lasted for over twenty two years, making it the longest single hip hop deal to date. He now resides in Manhasset, NY with his wife and four children.

We Came To Party (CDS)

Down The Aisle BW Favorite Fla

Rub My Back (CDS)