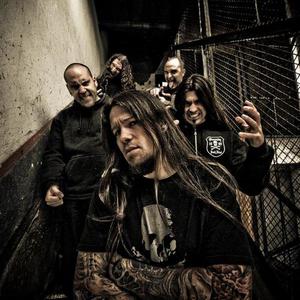 Kronos was formed in 1994 in Thaon-les-Vosges, France, by Micha?l Saccoman (Mike) and J?r?me Grammaire (Grams). At this point, the band played something in the vein of heavy metal/thrash metal. Two years later, Cristophe G?rardin (Kristof) joined the band as the vocalist and their music shifted to a more death metal oriented style and they recorded their first demo entitled "Outrance." In 1999, Thomas Viel (Tom) joined the band and Kronos had now started focusing on brutal death metal and concepts of ancient mythology (especially Greek).

During the following year a split CD was recorded containing three Kronos songs and two songs under their side-project None Divine.

Their first official album "Titan's Awakening" was released in 2001, produced by the band itself. The band achieved critical acclaim and got its first contract with Warpath Records (former Shockwave). A new edition of "Titan's Awakening" was released at the end of October the same year with a new cover designed by Deather (Angel Corpse, Gurkkhas, Vital Remains) as well as a new graphical booklet. In 2003, Richard Chuat (Ricardo) joined the band as the lead guitarist.

Later the band signed a contract for two albums with the new Spanish label Xtreem music managed by Dave Rotten from the band Avulsed.

The second album entitled "Colossal Titan Strife" was released in 2004. The album received a lot of good reviews and was sold well all over the world. The band gained more reputation in the extreme music scene and started performing more shows all over Europe with bands including Deeds of Flesh, Fleshless, Vile, Disfear, Pungent Stench, Devilyn and Avulsed.

After a long streak of concerts, Kronos entered the famous Hertz Studio (Vader, Decapitation, Trauma, Hate) in Bialystok (Poland), in July 2006 to record a new album called "The Hellenic Terror" which was released in April 2007.