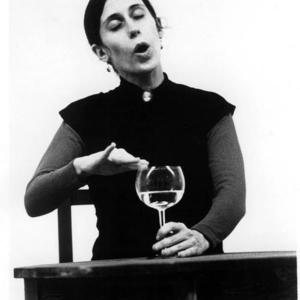 Meredith Monk is primarily known for her vocal innovations, including a wide range of extended techniques, which she first developed in her solo performances before forming her own ensemble. In 1964, she graduated from Sarah Lawrence College and in 1968 she founded The House, a company dedicated to an interdisciplinary approach to performance. Her performances influenced many artists, including Bruce Nauman, whom she met in San Francisco in 1968.

In 1978 Monk formed the ensemble called Meredith Monk and Vocal Ensemble (modelled after similar ensembles of musical colleagues such as Steve Reich and Philip Glass) to explore new and wider vocal textures and forms which often were contrasted with minimal instrumental textures. Powerful and influential pieces from this time include Dolmen Music (1979), which also was recorded for her first album released at Manfred Eicher's record label ECM in 1981. In the 1980s she wrote and directed two films, Ellis Island (1981), and Book of Days (1988), which developed from a single idea; "One day during summer of 1984, as I was sweeping the floor of my house in the country, the image of a young girl (in black and white) and a medieval street in the Jewish community (also in black and white) came to me", as Monk recounts in the liner notes of the ECM-recording. Apart from the film, different versions exist of this piece: two for the concert hall, and an album, explained by Meredith Monk and Manfred Eicher as "a film for the ears." In the early 1990s Monk composed an opera - Atlas which premiered in Houston in 1991. More recently, while continuing her work for her ensemble, she began writing for instrumental ensembles and symphony orchestra - her first symphonic work, Possible Sky (2003), and Stringsongs (2004), commissioned by the Kronos Quartet. In 2005, events were held all over the world celebrating the 40th anniversary of her career. These included a concert in Carnegie Hall, featuring Bj?rk, whose singing is fundamentally indebted to Monk's, and others, including the composers Terry Riley, DJ Spooky (who has sampled her on his album "Drums of Death"), and John Zorn and the new music ensembles Alarm Will Sound and Bang on a Can All-Stars, along with the Pacific Mozart Ensemble.


She has won many awards including a MacArthur Fellowship, and she holds honorary Doctor of Arts degrees from Bard College, the University of the Arts (Philadelphia), The Julliard School, the San Francisco Art Institute and the Boston Conservatory.

In a recent interview she said that her favourite music includes Brazilian music, especially Caetano Veloso's recordings, the music by Mildred Bailey ("the great jazz singer from the ?30s and ?40s"), and Bartok's cycle for piano Mikrokosmos.

On Behalf Of Nature