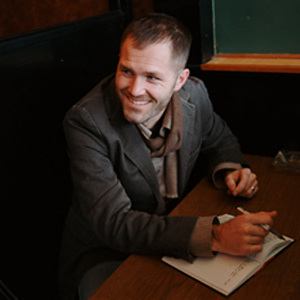 Jeffrey Foucault is an American singer-songwriter from Southeastern Wisconsin grown out of the americana/folk troubadour tradition. Foucault's musical career was seeded at seventeen, when he began playing John Prine tunes on his father's beat up mail-order guitar, and spent long evenings in his bedroom, spinning piles of old records on a hand-me-down turntable. When he was 18 he stole a copy of Townes Van Zandt: Live and Obscure from a friend, and a few years later, having quit school to work as a farm-hand and a house-carpenter Foucault turned to writing songs.

Foucault is married to fellow singer/songwriter Kris Delmhorst.
No Depression Magazine describes him as: "the bard of small-town anywhere... his poetry rich with details ... his worn-in voice like an old down jacket... frayed... gritted... plaintive poetry in the troubadour tradition... delivery so raw and real it fairly throbs."

His 2001 debut album, Miles from the Lightning, won much praise from critics and helped to kick-start a career of tours across the United States, Canada, and Europe. MOJO praised Miles as "A striking debut. [Foucault] comes out sounding like the love-child of Chris Whitley and Kelly Joe Phelps... strong songs, a voice and blues guitar that sound wiser than his years." Along the way, he has played with such artists as Guy Clark, Greg Brown, Gillian Welch, Todd Snider, Chris Smither, and Rosanne Cash.

Shoot The Moon Right Between The Eyes