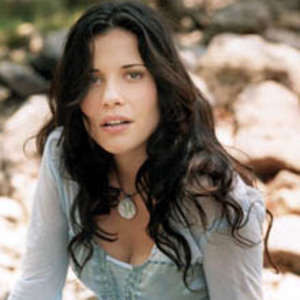 Shannon McNally is a soulful singer and an entrancing songwriter. Drawing on the defiant spirits of outlaws and visionaries such as Jesse James, Susan B. Anthony, Little Richard, she takes her listeners on a timeless and haunting journey through her self-coined North American Ghost Music on her new album 'GERONIMO.' Armed with a spine tingling voice, easy inner beauty, and songs that linger, she almost makes you wish she'd rob your bank.The native New Yorker moved to New Orleans several years ago, and the city's musical flavor is evident in her striking, incisive songs.

Recorded during a hot 14-day summer run at Dockside Studios, deep in Louisiana's bayou country, 'GERONIMO' (out June 28 on Back Porch/EMI) finds McNally walking proudly among singularly likeminded artists: J.J. Cale, Jerry Garcia, and The Band. "I understand that music is entertainment, but I'm not entertained by smoke and mirrors. I'm entertained by substance, tone, and a solid groove," says Shannon.Her songwriting reached a pinnacle for the new album; Shannon's literate songs inhabit a range of characters, many downtrodden and disaffected. "I write in the folk tradition," she says, "like Woody Guthrie, ballads and things that are universal in style." She also references the work of Bruce Springsteen, Gordon Lightfoot, Neil Young, and John Steinbeck. The fearless songwriter is not afraid to use words like "castigate" and "perpetual" when they fit the songs. Remarkably, Shannon never hides her influences, but she never sounds exactly like them either.Produced by Charlie Sexton, mixed by Grammy Award winning Engineer Trina Shoemaker, and featuring stellar musicians like bassists Tony Garnier, and Tony Hall, multi-instrumentalist Greg Liesz, drummer to the stars Raymond Weber, keyboard legend Ian McLagan, and Sexton himself, 'GERONIMO' is a chapbook of stories, a collection of gritty blues, country, roots, and rock. The seasoned musicians in these inspired sessions inspired Shannon. She called the band "magic," going on to say, "The band provided a sense of timelessness to the songs.Shannon's commanding voice perfectly drives the accomplished band. A remarkable instrument, her singing alternately offers alluring purrs, Dylanesque sneers, blues queen shouts, and balladeer's rasps, perfectly suiting each song.From the first intoxicating moments of its opening track "The Worst Part of a Broken Heart," to the simmering "Sweet Forgiveness," to the haunting beauty of "Leave Your Bags by the Door," Shannon McNally's deft musical versatility, soulful vocals and captivating songwriting make a powerful, lasting impact.'GERONIMO' includes the rapid-fire, image rich "The Hard Way," in which Shannon observes a variety of surreal people and situations. Her witty and intelligent lyrics give this Dylanesque rocker a three-dimensional life. On Bobby Charles' country soul waltz "Tennessee Blues," the honky tonk piano meets the tremolo guitar as Shannon contemplates "sleeping in nothing but peace". The carousing "Miracle Mile" recalls The Faces, with Shannon belting out the refrain atop a muscular groove and a bluesy slide guitar riff. "Leave Your Bags By The Door" finds Shannon taking the voice of an earth-weary innkeeper, offering a midnight wanderer shelter from the storm. She sings with conviction and authority on the song, even as she begins a short scat passage.Shannon conjures just the right amount of the tenderness for the album's warm closer, a cover of Taj Mahal's "Lovin' In My Baby's Eyes." That the band includes musicians who have accompanied Bob Dylan, The Rolling Stones, Emmylou Harris, Fats Domino, Rod Stewart, and Joni Mitchell only adds to the authenticity."Pale Moon," adorned with rustic banjo, illuminates Shannon's eye for detail and emotional delivery: "Oh I'd like to find myself trapped in some desert town with you, just me and you / My long black hair waving in the dry wind / Me waving at you, my lover, from some ancient balcony / But like a thirsty vision, I see you and you're gone / Where could you have run to?"Conceived to working class Irish American parents on the 4th of July, 1972, McNally was born on Long Island, New York on St. Patrick's Day March of 1973. Citing early influences such as Jim Henson, Uncle Remus, The Yellow Submarine, and Star Wars, McNally's sensibilities were definitely shaped by the events and imaginations of the day. She graduated from the same high school in Freeport, NY on Long Island that produced such folk heroes as Lenny Bruce, Lou Reed, and Run DMC. After high school she went on to earn a Bachelor's Degree in Social Anthropology at Franklin and Marshall College in Lancaster County, Pennsylvania.Her debut album released in January of 2002, Jukebox Sparrows (Capitol Records), garnered rave reviews and revealed itself as a surprisingly confident musical and lyrical debut for such a young songwriter. Her debut album inspired Rolling Stone to liken her to "a young Mick Jagger." Rolling Stone Magazine gave it 3 1/2 stars. It also spawned the AAA radio hit "Now That I Know," which also appeared on the 'Sweet Home Alabama' soundtrack. McNally has toured with Willie Nelson, Stevie Nicks, John Mellencamp, Ryan Adams, Robert Randolph and the Family Band, and Rufus Wainwright. She has appeared on The Late Show with David Letterman, Late Night with Conan O'Brien, and The Tonight Show with Jay Leno.Her past accomplishments stand to be overshadowed when GERONIMO is released. She declares, "There's a certain peace of mind I had after I made this record, that I made the right decisions, and that I can take full responsibility for my creative self. It's a barometer for my own standards." There is no doubt that Shannon McNally has arrived as an artist.