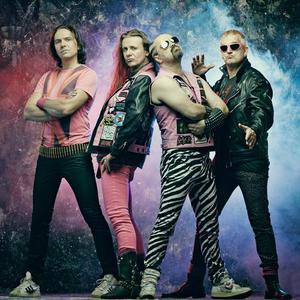 J.B.O. (founded in 1989) is a German metal/rock band with comedy lyrics. They are especially known for their parody cover versions of famous songs. The name, originally "James Blast Orchester", was meant as a parody of a German easy listening act named "James Last Orchestra". They had their first concert in October '89 on a newcomer festival in their hometown Erlangen, Franconia. From the start meant as a comedy rock act, the setlist consisted mostly of cover versions of evergreens with new funny lyrics.

They had their first concert in October '89 on a newcomer festival in their hometown Erlangen, Franconia. From the start meant as a comedy rock act, the setlist consisted mostly of cover versions of evergreens with new funny lyrics.

The first five years the band was only a side project. All members tried to be successful with other bands. At least they were able to earn their money with playing music.


1994 one Song of J.B.O. Ein Guter Tag Zum Sterben (a perfect day to die) was on rotation on the local radio station. As it was only a demo-tape but more and more people asked for a CD, J.B.O. decided to get this done. They recorded their first CD in one day and two nights. It was the EP Eine gute CD zum Kaufen (a perfect CD to buy) which sold pretty good for a local act. The next EP BLASTphemie was just an Xmas present for the fans.

The real strike came in 1995 with their first longplayer Explizite Lyrik. The title is a word by word translation of the "parental advisory" sticker which can be translated as "bold poetry". There were 20 Tracks with all the hits of the first five years of J.B.O. As they were still on the independent label "Musical Tragedies", there was no great marketing for this CD. But within three months there were 10.000 copies sold and it became more and more (over 300.000 until present). In summer 1996, J.B.O. entered the German LP charts and stayed there for months.

Their first major release Laut! (loud) was published in 1997. It climbed up to number 13 in the German LP charts.

In 1998 they published Meister der Musik (masters of music) which remained two weeks in the top ten of German LP charts. The album stated that J.B.O.'s original songs did not stand back behind their cover versions.

One year later, J.B.O. celebrated their 10th anniversary with a big festival with many bands they call their friends.

The year 2000 brought many changes for the band: Schmitti and Holmer "a Bier" Graap ? the complete rhythm section ? decided to quit the band, due to further plans in their lives. Hannes and Vito decided to continue J.B.O. as all lyrics and music was written by both of them. The album SexSexSex was recorded by the "old" members, but published by the "new" members:
The new drummer - an old school friend of Vito - is Wolfram Kellner (Ex-Fiddler's Green). The new bassplayer is Ralph Bach. In 2001 they played 94 concerts with the new line-up which can be heard on J.B.O.'s first live album Live-Sex.

In 2002 the first studio record in the new line-up was produced in a house on an island in Croatia. Released in September, Rosa Armee Fraktion (pink army fraction) went into the charts up to number 13, like the one before. The music was now written by all four members of J.B.O. together with producer Christoph Beyerlein. The release tour presented J.B.O. grown together as a rock force dressed in pink camouflage army clothes. The co-headliner status on the big metal-festivals in Germany (Wacken Open Air, With Full Force Festival) in 2002 and 2003 showed that J.B.O. had manifested their position in the German rock scene.

2004 was J.B.O.'s 15th anniversary. They arranged a festival in their hometown with their buddy bands from all over Europe called the "30/2-Festival". About 2.500 people celebrated the party on July the 31st. Two days later on August the 2nd they released their 6th studio-album, called United States Of Bl&ouml;edsinn that hit the charts on number 6 a week later.

As J.B.O. don't like to translate the term "Bl?dsinn" - which is a central idea in their lyrics - simply by "nonsense", they want to establish the German word internationally as a loan word, like "Kindergarten" or "Autobahn". So they invented the new spelling "Bl?edsinn" - if you don't have the "?" on your keyboard, just take the "o" - and it still stays "Bloedsinn".

On October the 1st 2004 J.B.O. started their big anniversary tour all over Germany, Austria, Switzerland and Luxembourg. One concert of this tour was their 500th gig. Another concert on November 2 was recorded audio and video for a planned DVD.

The DVD was a well kept secret until summer 2005. When announced there was an outcry of joy among J.B.O. fans. The parts of three live shows (the 30/2-Festival, Wacken 2004 and Mannheim tour-concert 2004) only completed a treasury of TV parodies this DVD contained. It came out on October 21st 2005 and was followed by J.B.O.'s first best of compilation named F&uuml;r Anf&auml;nger (for beginners) that was released only two weeks later. Best of compilations are due to record label politics in most cases. This one is no exception regarding this, but J.B.O. selected the songs themselves, re-recorded a classic from "Explizite Lyrik" named K&ouml;nige (Kings) and provided previously unknown background information to all tracks.