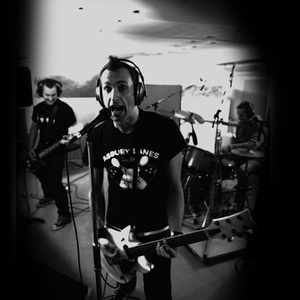 WIZO (pronounced "Vee-soh") was a Punk Rock band from Sindelfingen, Germany. The band was formed in 1985. Their messages run from political to humorous, but they are strongly against Nazism, Fascism, Racism, and "all of that dreck." They separated in March 2005. Jochen Bix founded the band "Wieso" (meaning "why?") with friends in Sindelfingen, a town in the vicinity of Stuttgart. In 1986 they altered their name to "WIZO" and got their first gig in 1987.

Jochen Bix founded the band "Wieso" (meaning "why?") with friends in Sindelfingen, a town in the vicinity of Stuttgart. In 1986 they altered their name to "WIZO" and got their first gig in 1987. In 1988 WIZO released their first demo tape, in 1990, they released another demo. Jochen only sang a few songs, including the Judas Priest cover, "Breakin' the Law." Then, he left and Axel Kurth became the front man.

Later that year, they founded their own label, Hulk R?ckorz and released the "Klebstoff" ("Glue") EP, their first vinyl record.

In 1992, their first CD, "Bleib Tapfer" ("Stay Brave") was released. They then released the single "Roy Black ist tot" ("Roy Black Is Dead") as a dubious tribute to the German pop-star Roy Black on the one year anniversary of his death. The tribute in question was a punk cover of a children's song with the lyrics altered to a German version of "Roy Black is dead, Roy Black is dead." It was named the worst CD of the year by the Bild-Zeitung, a major German tabloid.

In 1996, WIZO's lineup changed; Ingo Hahn replaced their long-standing drummer, Charly Zasko, and he and Axel "are fortunately no longer in contact." With Ingo, "Doof wie Schei?e" ("Dumb as Shit") was also recorded.

In 1997, they released the "Weihnachten stinkt!" ("Christmas stinks!") Split EP with the Japanese punk band Hi-Standard.

In 1998, Wizo released "Kraut & R?ben" ("Tops and Curnips") EP on Fatwreck, being the songs that were already popular in Germany, but unknown to the rest of the world. That year, Herr Guhl replaced Ingo as drummer.

September, 2004, WIZO made a first in the music industry by releasing a single on USB keydrive, titled as the "WIZO Stick EP." In addition to five high bitrate MP3's, it also included a video, pictures, lyrics, and tabs. In November of 2004, coinciding with the release of their final album, "Anderster," they announced their intent to dissolve in March of 2005, upon the conclusion of their farewell tour.