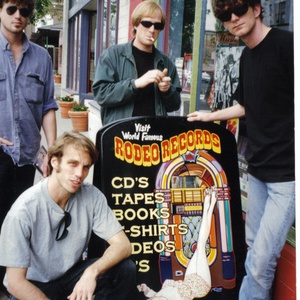 1. Hater was a side-project in the 1990s composed of Matt Cameron (Soundgarden, Temple of the Dog, Pearl Jam), Ben Shepherd (Soundgarden), John McBain (Monster Magnet), and Brian Wood (brother of Mother Love Bone frontman Andrew Wood). The band, minus Mr. Wood, would later form the group Wellwater Conspiracy, which was composed of the trio remaining. Hater's self-titled debut album was recorded between Soundgarden's two epic albums Badmotorfinger and Superunknown and released in 1993.

Hater's self-titled debut album was recorded between Soundgarden's two epic albums Badmotorfinger and Superunknown and released in 1993. Although the band only released one album during their time together, a second album came about 12 years later in 2005 when demos from their 1995 sessions surfaced. The band strays away from Soundgarden's Black Sabbath and Led Zeppelin's hard-rock style. Instead, Hater plays more like garage rock with a classic rock sound, which is summed up with their cover of Cat Stevens's "Mona Bone Jakon."

3. HaTeR - Kevin "HaTeR" McMahon is the founder and driving force behind HaTeRtainment. His life's work is his music. Since the age of 13, HaTeR has been fine tuning his emcee and engineering skills. He is a natural born entertainer and while in the limelight it shows. His voice "captivates the audience" and his "tenacious" "larger than life" persona usually comes as a shocker when you first lay eyes on him. His style demands attention and is somewhat "Refreshing". HaTeR brings a unique flavor and flow to the table that breaks the mold of the cookie cutter white rapper. Be sure to pay close attention to this artist. For he may be the next big thing.