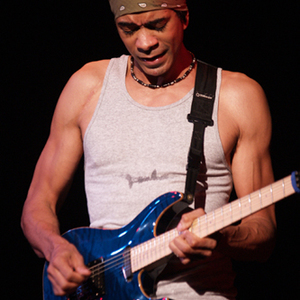 Greg Howe (born 1964) is a virtuoso guitar player, originally from Easton, Pennsylvania. He started his career as a shredder on Mike Varney's Shrapnel label in the 1980s, and became one of the founding fathers of the shred trend alongside players such as Marty Friedman, Jason Becker, Paul Gilbert, Richie Kotzen, Tony MacAlpine and Vinnie Moore, among others. However, Howe soon developed a more distinct style that was more rooted in jazz fusion than the neoclassical leanings of his contemporaries.

However, Howe soon developed a more distinct style that was more rooted in jazz fusion than the neoclassical leanings of his contemporaries. This unique fusion of styles has become his trademark and easily distinguishes him from any other player working today. His style borrows heavily from the jazz sensibilities of Allan Holdsworth, but also mixes in a bluesy, groove-laden vibe and frequent use of odd time signatures.

Howe is perhaps best known for his great skill at improvising, although his natural-sounding guitar tone could be considered most distictive of him.

Apart from his solo career, Howe has established himself as a highly sought after session musician, being hired by mainstream acts such as Michael Jackson, Enrique Iglesias, *NSYNC and Justin Timberlake to perform with them on tour.

Howe is also a producer and guitar instructor.