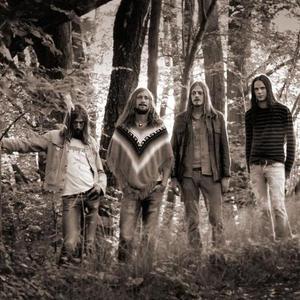 There is more than one artist known as Graveyard: 1. Graveyard is a hard rock band from Gothenburg, Sweden. Joakim Nilsson, Rikard Edlund (both formerly of Norrsken), Axel Sj?berg, and Truls M?rck formed Graveyard in 2006. When Norrsken disbanded in 2000, guitarist Magnus Pelander went on to form doomy folk metal act Witchcraft and Nilsson and Edlund joined Albatros, a growly blues rock band whose lineup also included Sj?berg on drums.

1. Graveyard is a hard rock band from Gothenburg, Sweden.

Joakim Nilsson, Rikard Edlund (both formerly of Norrsken), Axel Sj?berg, and Truls M?rck formed Graveyard in 2006. When Norrsken disbanded in 2000, guitarist Magnus Pelander went on to form doomy folk metal act Witchcraft and Nilsson and Edlund joined Albatros, a growly blues rock band whose lineup also included Sj?berg on drums. Initially they considered Albatros a hobby project, but after five years the members began taking their music more seriously and had grown dissatisfied with the direction their sound had taken. When Albatros broke up, Nilsson and Edlund decided that for their next venture, they would head back towards their roots as musicians and songwriters. Nilsson explains, ?I am a singer, but in Albatross I only played guitar. Rikard played guitar but he is a bass player. We also wanted a more straightforward [rock] sound.?

Together with Sj?berg and guitarist/singer Truls M?rck they began practicing as Graveyard. Upon their initial formation, Graveyard quickly recorded a two track demo, played a total of three shows, and began planning for a full-length album with Swedish boutique label, Transubstans Records. In the meantime, they posted a demo of some of their material on MySpace. Songs from the band's Myspace caught the ear of Tony Presedo, founder of TeePee Records. Their self-titled debut album was recorded by Don Ahlsterberg and released in early 2008. On the recording sessions' completion, Truls M?rck was replaced by guitarist Jonatan Ramm. The debut album received generally good reviews. Graveyard performed at the 2008's South by Southwest Music Festival.

2. Graveyard is also a melodic stoner rock/metal band from Vilnius, Lithuania. The band was formed in 2005 by five young like-minded guys. Later, the rhythm guitarist Artas left the band. Graveyard made a break when due to disagreements their vocalist Donatas Gailiu?is also left the band. In the late spring of 2008 the band got back with a new vocalist and are ready to rock the stage again. The current members are: Simonas Palevi?ius (vocals), Marius Palivonas (guitar), Vaidotas Segenis (drums) and Martynas Samulevi?ius (bass guitar).

3. Furthermore, Graveyard is an old school death metal band formed in 2007 near Barcelona, Spain, based on the roots of classic death metal Bands like Grave, Death or Dismember. In 2007 they released their first Demo CD "Into the Mausoleum". During 2009 they also released two split records together with Terrorist and Deathevokation. In September 1st 2010 they realeased their first full lengtht album called "One with the Dead". Official website: www.graveyardofdoom.com/

4. A Japanese power electronics project which released several cassettes starting in 1985. They played a style similar to early Whitehouse.

5. Serbian heavy, thrash metal band from Kru?evac.The band was formed in February of 2009. Graveyard won a rock&roll marathon in Kru?evac, where they had beaten their competition of almost 20 bands, and the reward helped them as a part of the recording budget. They recorded 5 songs for their EP "The Black Knight". In June of 2010, they won the "Sumadijski Demo Fest" in Kragujevac, Their song "Glory" was released on a compilation album for Serbian metal magazine "Nocturne", and in August they took second place in "Battle Of the Bands" competition in Lazarevac. The band is currently promoting their music by playing shows and festivals over Serbia, and are preparing their first full length album.

Hold Back The Dawn

One With The Dead