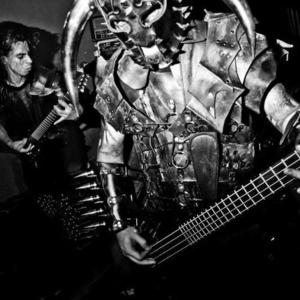 Formed in a fucked up alley next to the dumpsters and meth labs in Southern California in 2000, Gravehill was spawned to bring back the true way of death fucking metal. The "Practitioners Of Fell Sorcery" was then unleashed upon the world. Only a few copies were made. These demons were inactive for a few years due to drug abuse, homelessness, incarcerations (stints in the Pen), or hiding from law enforcement and government agencies. In 2006 the maniacs were finally ready to continue the savage death noise and the second recording "Metal Of Death" was unleashed.

A deal was made with Enucleation Records and the three "Metal Of Death" tracks were re-recorded along with two new tracks, the two part hymnal "The Advocation Of Murder And Suicide" which was released in July 2008. After numerous tours and also playing the local Southern California area, the next release on Enucleation Records was "Rites Of The Pentagram" the debut full length. Gravehill rereleased "Rites Of The Pentagram" in the Summer of 2010 through Ibex Moon Records. The next album is called "When All Roads Lead To Hell", and will be unleashed in May of 2011. For touring information or band contact go to www.myspace.com/gravehill666 or www.facebook.com/gravehill. For merchandise information or to buy the releases of Gravehill go to : www.ibexmoonrecords.com or www.relapserecords.com. Oh and by the way, your mother sucks cock in heaven!

"Rites Of The Pentagram" 2009 Enucleation Records

The Unchaste, The Profane, & The Wicked

When All Roads Lead To Hell

Rites Of The Pentagram