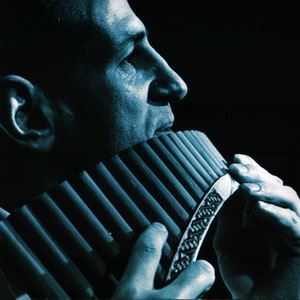 Gheorghe Zamfir is a Romanian artist: composer, interpreter, poet. He was born in Gaiesti, on the 6th of april 1941. Attracted to music he entered the Gaiesti Music School, hoping to study the accordion. Instead, he was assigned to a pan flute class where promptly demonstrated an extraordinary ability with the instrument. In 1955 enters the Music School in Bucharest (today- the Musical High School "Dinu Lipatti) in the class of Fanica Luca.

In 1959 Zamfir receives the First Prize in a national contest. The same year, he recorded the first songs, personal compositions in a popular style with the Folkloric Orchestra of the Romanian Radio Broadcasting Corporation. Another important prize is the one from Levadia, Greece. After the high school graduation, (1961) enters the "Ciprian Porumbescu" Conservatory from Bucharest and graduates in 1966 (Pedagogy section), and in 1968 the section of choir conducting with prof. D.D. Botez and orchestra conducting with Iosif Conta.

In 1966 he is hired as a director of the ensemble "Ciocarlia" having under his baton 300 artists: the symphonic orchestra, the ballet ensemble, the folkloric orchestra and the soloists. In 1966 Zamfir releases his first Electrecord disc which will continue exclusively his most popular authentic compositions, among which the famous songs: "Doina de Jale" and "Doina ca de la Visina", and in 1968 releases his second disc. Between 1968 and 1970 he goes on his first tours in the Federal Germany, Switzerland, URSS, China, bringing him acclaim from critics and public alike.
In 1969 leaves the "Ciocarlia" ensemble, and in 1970 forms a traditional concert group "taraf" obtaining amazing success in Paris at "Vieux Colombier" in 45 recitals, playing for the first time the 4 pan flutes- soprano, alto, tenor, bass- that he invented himself in 1968. Introducing the pan flute in all the musical styles, beginning a world sound revolution, he got spectacular comments from the greatest musicians of that time like : Sergiu Celibidache, Hanz Hollinger, Maurice Bourg, Henri Dutilleux, Pierre Boulez and others. From now on, from America and Canada to Australia, Japan and South Africa, Zamfir produces full halls and deep emotions.

In 1972 creates the Pan flute-organ style, introducing new repertoires and ways of interpreting. In 1974 composes the first "Mass for the Peace" for pan flute, choir, organ and orchestra, recorded in Bucharest with the Radio Orchestra and the Madrigal choir -lead by Marin Constantin, under the baton of Paul Popescu.
In 1976, his single "Ete d'amour" becomes one of the hits of the year. In one of the tours he meets the German composer and conductor James Last, with whom Zamfir collaborated for the " Lonely Shepherd ", his second European hit. He has tours in USA at Carnegie Hall and Kennedy Center, Australia, New Zeeland, Japan, Canada, South Africa, Scandinavia, Belgium, France, Switzerland, Austria. He gets over 90 gold and platinum disks , 4 golden discs in South Africa, 4 platinum discs in New Zeeland, 4 golden discs in Australia.
In 1981 his discs are released on the American market. Until 1985 they were sold in millions of copies in USA and Canada. In USA he gets 2 golden discs, unique event for an European artist, and in Canada, through all 5 millions of sold discs he beats all the records.

In France, Germany, Austria and Belgium, Zamfir receives titles and medals, gold and platinum discs, the Order for Cultural Merit of France, the title of officer and cavalier of France, Belgium and Luxembourg.
In 1982 he creates the first rhapsody and the first concert for pan flute that he records for Philips with the Monte Carlo Philharmonic, under the baton of Lawrence Foster. In 1984 he creates the first quintet for pan flute and string quartet called "The Poplars Quintet", that he sang with the "Oxford Quartet" in Toronto in a live radio broadcasting; he composes several chamber works that he performed with the famous quartet "Enescu" in France and Germany.
In 1986 he records his first disc with baroque repertoire, among which the Double Concert in B minor for violin and oboe by J.S.Bach with British Chamber Orchestra.
Between 1988-1990 he is received for three times at the Vatican, being the first musician that sang during the private mass of the pope John Paul the second, receiving the Vatican Medal and twice the diploma of "Don Bosco" University in Rome. He receives twice the gold medal of the French Academy Association "Art-Science and Letters" of France, twice the Prize of "Charles Cros"Academy, "The Golden Sagittarius" in Italy, gold discs in Switzerland and Germany. He goes on tours in Latin America (in Columbia receives the Commander's order from the President ) in Ecuador and Venezuela he is invited for a great advertising campaign for a film using one of his own musical themes. He collaborated at the recording of the music of "Picnic at Hainging Rock", "Once upon a time in America" and "Karate Kid", in Australia, in Italy and Hollywood by the Paramount Company.

After 1990 he returns in Romania and continues his concerts and tours in France, Switzerland, and especially in Turkey where he is declared the most popular composer and artist of the XXth century. Author of over 300 works in the folkloric, chamber, choral, vocal, instrumental and symphonic style, Gheorghe Zamfir has a rich activity as a professor at the National University of Music in Bucharest, where it was created the first pan flute section in the world; he continues to give concerts on the most prestigious stages with symphonic and chamber orchestras, in recitals with piano and organ, achieving the status of one of the greatest musicians of the world, and for sure the most complex Romanian artist alive.

The repertoire of G.Zamfir is one of the most varied. He contains from baroque and classic composers like Bach, Corelli, Vivaldi, Telemann, Schubert, Schumann, Puccini, to contemporary known composers like Lennon, McCartney, Billy Joel and Elton John. We must also remember his own compositions, beginning with concerts for orchestra and pan flute, to simple songs reflecting the Romanian popular tradition:
- "Gloria", 1975
- "The breath of time", 1974
- "Colors of autumn"
- "Romantic Impression"(for pan flute and piano), 1988
- "Homage to J.S. Bach" (recorded for Philips with the pianist Georges Reboul, Paris, 1973)
- "Green Waltz"
- "Black Waltz"
- "Lyric Symphony"
Gheorghe Zamfir also published 3 volumes of poetry, 2 volumes of essays, an autobiographical book and had 4 painting exhibitions in the country and abroad. He is also involved in the actions of a foundation having his name, and who serves generous humanitarian and cultural purposes.

Music From The Movies

Love Story Of The Panpipe

The Beautiful Sound Of The Pan Pipes