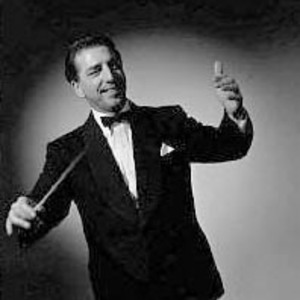 Biography Mantovani was born in Venice, Italy and his father was the concertmaster of La Scala orchestra under Arturo Toscanini. His family moved to England in 1912, where he studied at Trinity College of Music in London. After graduation, he formed his own orchestra, which played in and around Birmingham. By the time World War II broke out, his orchestra was one of the most popular in UK, both on the BBC and in live performances.

He was also musical director for a large number of musicals and other plays, including ones by Noel Coward. After the war, he concentrated on recording, and eventually gave up live performance altogether. He worked with arranger and composer Ronnie Binge, who developed the "cascading strings" sound (also known as the "Mantovani sound").[citation needed] His records were regulars in stores selling hi-fi stereo equipment, as they were produced and arranged for stereo reproduction. In 1952 Binge ceased to arrange for Mantovani, but his distinctive sound remained.

He recorded for Decca until the mid-1950s, and then London Records. He recorded over 50 albums on that label, many of which were top-40 hits. These included Song from Moulin Rouge and Cara Mia, which reached No. 1 in Britain in 1953 and 1954, respectively. The latter was also Mantovani's first U.S. Top Ten hit.

In 1959, Mantovani starred in his own syndicated television series, Mantovani, which was produced in England and which aired in the United States. 39 episodes were filmed.[1]

Mantovani made his last recordings in 1975.[citation needed]

[edit] Music style and influences
The cascading strings technique developed by Binge became Mantovani's hallmark in such hits arranged by Binge as "Charmaine". Binge developed this technique to replicate the echo experienced in venues such as cathedrals by arrangement alone, in an echo-free surrounding.

Author Joseph Lanza describes Mantovani's string arrangements as the most "rich and mellifluous" of the emerging light music style during the early 1950s. He stated that Mantovani was a leader in the use of new studio technologies to "create sound tapestries with innumerable strings", and that "the sustained hum of Mantovani's reverberated violins produced a sonic vaporizer foreshadowing the synthesizer harmonics of space music."[2]

In 1958 Mantovani and his family bought a holiday home in Bournemouth in Durley Chine Road, then in 1961 acquired a new property in Burton Road (now part of Poole). He moved, finally, to a new home in Martello Road in Poole.

The continued popularity of Mantovani's music is evident by the number of original albums which are being released, on labels such as Dutton-Vocalion, and by the many compilations available throughout the world. In 2008, as a result of successful, ongoing CD sales, amongst other contributing factors, the Mantovani Orchestra (performing from the original scores) was recreated for a tremendously successful historical tribute concert, sponsored by Bentley Motors, held at the Lighthouse, in Poole, England, on 27 January, conducted by Sam Newgarth, MBE. Much critical acclaim has led to the planning of a second concert, to take place in January 2009, at the same venue. There are four Mantovani websites in honour of the maestro, a written biography by Colin MacKenzie entitled Mantovani - A Lifetime In Music (ISBN 1-905226-19-5). For further information, please visit http://www.hallowquest.com/mantiindex.htm; http://members3.jcom.home.ne.jp/torumonty; http://www.lighthousepoole.co.uk (re. ticket sales for 31 January 2009). A ten CD set 'The Wonderful World of Mantovani' was released in November 2008 in Japan (a link to the website in Japan may be found by visiting www.hallowquest.com/mantiindex.htm), featuring many rare tracks which have never been released on CD before, in a superbly remastered format, and, following the success of the Mantovani Orchestra's 2008 concert, 'More MANTOVANI Magic' took place at Lighthouse in Poole, England, on 31 January 2009, again conducted by maestro Sam Newgarth MBE. The concert was sponsored by Poole Audi, and also with the generous support of Richard Cox.

Owing to the success of 'More MANTOVANI Magic', which took place at Lighthouse in Poole on 31 January 2009, a DVD and CD is currently being planned for worldwide release. Once again, Mantovani's music attracted a full audience, and the programme included many rarities, including 'Domino', which was performed by virtuoso accordionist, Eddie Hession, who was also the soloist in Ron Grainer's 'Maigret Theme', specially arranged for the Mantovani Orchestra by Franck Leprince. Paul Barrett gave an outstanding performance of Cecil Milner's composition, 'Percussion On Parade', and clarinettist Sue Topp astounded the audience with her renditions of 'Bewitched' featuring soprano saxophone, and 'Non Dimenticar', on alto saxophone. Mantovani's lush version of Glenn Miller's 'Moonlight Serenade' was given an unsurpassed performance, by the shimmering strings, led by Franck Leprince, and the mellifluous brass section comprising Mike Lovatt and Danny Marsden on trumpets, Russell Howarth and Andy Fawbert, on trombones, and the golden French horn of Richard Ashton. Once again, the presenters were the actress, and Sixties TV and film star, Alexandra Bastedo, and Radio and Television broadcaster and personality, Ed Stewart [full review of concert, by Jeremy Miles: >>> Bournemouth Echo + Mantovani]. The orchestra boasts some of the finest musicians in the United Kingdom.

A Lounge Legend Tribute To Mantovani

The Magic Of Mantovani CD2

The Magic Of Mantovani CD1