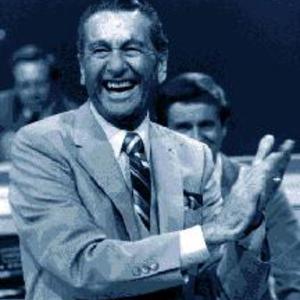 Lawrence Welk (March 11, 1903 ? May 17, 1992) was a musician, accordion player, bandleader, and television impresario, hosting "The Lawrence Welk Show" from 1951 to 1982. His style came to be known to his large number of radio, television, and live-performance fans as "champagne music." He is a 1961 inductee of North Dakota's Roughrider Award. Contents Lawrence was born in Strasburg, North Dakota, as one of nine children to Catholic, German-speaking immigrants from the French portion of Alsace-Lorraine, via Odessa, Ukraine.

Lawrence was born in Strasburg, North Dakota, as one of nine children to Catholic, German-speaking immigrants from the French portion of Alsace-Lorraine, via Odessa, Ukraine.

The family lived on a homestead outside of town, which today still stands as a tourist attraction. The first year they lived there, they spent the cold South Dakota winter underneath an upturned wagon covered in sod.[citation needed] Never intent on being a farmer, Welk became interested in a career in music, convincing his father to purchase a mail-order accordion for $400. He made a promise to his father that he would continue to work on the farm until he turned twenty-one; in exchange, he would work on the farm and any money he made working elsewhere, whether doing formwork or putting on a show, would go to his family.

Welk didn't learn English until he was 21 because he always spoke German at home. To the day he died, he spoke with a noticeable German accent. When he was asked about his ancestry, he replied always with "Alsace-Lorraine, Germany"; this is explained in his autobiography, entitled "Wunnerful, Wunnerful!"

On his twenty-first birthday, Welk, having fulfilled his promise to his father, left the family farm to pursue a career in music. During the 1920s, he first performed with the Lincoln Boulds and George T. Kelly bands, before starting his own orchestra. He led big band engagements in North Dakota and eastern South Dakota. These bands included the Hotsy Totsy Boys and later the Honolulu Fruit Gum Orchestra.[citation needed] His band was also the station band for popular radio station, WNAX, in Yankton, South Dakota. In 1927, he graduated from the MacPhail School of Music in Minneapolis, Minnesota.

During the 1930s, Welk led a traveling big band, specializing in dance tunes and "sweet" music. The term "Champagne Music" was derived from an engagement at the William Penn Hotel in Pittsburgh, when a dancer referred to his band's sound as "light and bubbly as champagne." The band performed in many places across the country, particularly in the Chicago area. In the early 1940s, the band began a regular 10-year stint at the Aragon Ballroom in Chicago, regularly drawing crowds of nearly 7,000.

His orchestra also performed frequently at the Roosevelt Hotel in New York City during the late 1940s. From 1944 to 1945, Welk led his orchestra in many motion picture "Soundies," considered to be the early pioneers of music videos [citation needed], and the band had its own syndicated radio program, sponsored by Miller High Life Beer.

In 1951, Welk settled in Los Angeles, California. That same year, he began producing "The Lawrence Welk Show" on KTLA in Los Angeles where it was broadcast from the Aragon Ballroom in Venice Beach. After being a local hit, the show was picked up by ABC in the spring of 1955. Welk's television program had a policy to play well-known songs and tunes from previous years, so that the target audience would only hear numbers that they were already familiar with. Very occasionally, in the TV show's early days, the band would play a tune from the current charts, but strictly as a novelty number ("Nuttin' for Christmas" became a vehicle for comic singer Rocky Rockwell, dressed in a child's outfit; Elvis Presley's "Don't Be Cruel" was sung by violinist Bob Lido, wearing fake Elvis Presley sideburns).

Welk never lost his affection for the hot jazz he'd played in the 1920s, and when a Dixieland tune was scheduled, he would enthusiastically lead the band.

The type of music on "The Lawrence Welk Show" was almost always conservative, concentrating mostly on popular music standards, polkas, and novelty songs, delivered in a smooth, calming, good-humored easy listening style and "family-oriented" manner. Although described by one critic as "the squarest music this side of Euclid,"[citation needed] this strategy proved commercially successful, and helped it stay on the air for 28 years.

Much of the show's appeal was Welk himself. His unusual accent appealed to the audience. (On one 1955 show, he mentioned Danny Thomas's series, "Mek Room fur Deddy.") While Welk's English was passable, he never did grasp the English "idiom" completely, and was thus famous for his "Welk-isms," such as "George, I want to see you when you have a minute, right now." His TV show was recorded as if it was a live performance, and was sometimes quite freewheeling. Another famous "Welk-ism" was his trademark count-off, "A one and a two.." which was immortalized on his California automobile license plate that read "A1ANA2".[citation needed] This plate is visible on the front of a Model A Ford in one of the shows from 1980.

He often took ladies from the audience for a turn around the dance floor. During one show, Welk brought a cameraman out to dance with one of the ladies and took over the camera himself.

Welk's musicians were always top quality, including accordionist Myron Floren and New Orleans Dixieland clarinetist Pete Fountain. Though Welk was occasionally rumored to be very tight with a dollar, he paid his regular band members top scale - a very good living for a working musician. Long tenure was very common among Welk's regulars. For example, Floren was the band's assistant conductor throughout the show's run. He was noted for spotlighting individual members of his band and show. His band was well-disciplined and had excellent arrangements in all styles.[citation needed] One notable showcase was his album with the noted jazz saxophonist Johnny Hodges. Welk had a number of instrumental hits, including a cover of the song "Yellow Bird". His highest charting record was his recording of "Calcutta". Welk himself was indifferent to the tune, but his musical director, George Cates said that if Welk did not wish to record the song, he, (Cates) would. Welk replied, "Well, if it's good enough for you, George, I guess it's good enough for me.? Despite the emergence of rock and roll, "Calcutta" reached number 1 on the U.S. pop charts in 1961, and was recorded in only one take.

However, Walk's insistence on wholesome entertainment led him to be a somewhat stern taskmaster at times. For example, he fired Alice Lon, the original "Champagne Lady," on the air after she crossed her legs on a desk. [Citation needed] Welk told the audience that he would not tolerate such "cheesecake" performances on his show. He often arbitrated marriage disputes for his stars.

"The Lawrence Welk Show" embraced changes on the musical scene over the years. The show continued to feature fresh music alongside the classics for as long as it existed, even music originally not intended for the big band sound. During the 1960s and 1970s, for instance, the show incorporated material by such contemporary sources as The Beatles, Burt Bacharach and Hal David, The Everly Brothers and Paul Williams, albeit in Welk's signature "Champagne" style. The show, which was originally produced in black and white, was recorded on videotape starting in 1957, and it switched to color for the fall TV season that started in September of 1965. In time, it would feature synthesized music and, toward the end of its run, early chroma key technology would add a new dimension to the story settings sometimes used for the musical numbers. He referred to his blue screen effect in one episode as "the magic of television."

During its network run, "The Lawrence Welk Show" aired on ABC on Saturday nights at 8 p.m. (Eastern Time). In fact, Lawrence headlined two weekly prime time shows on ABC for three years. From 1956 to 1958, he hosted a show entitled Top Tunes and New Talent, which aired on Monday nights. The series moved to Wednesdays in the fall of 1958 and was renamed The Plymouth Show, which expired in May 1959. During that time, the Saturday show was also known as The Dodge Dancing Party. ABC cancelled the show in the spring of 1971, citing an aging audience. However, it continued on as a syndicated show on 250 stations across the country (including many ABC affiliates, but at an earlier time), until the final original show was produced in 1982.
Welk was married for 61 years, until his death, to Fern Renner, with whom he had three children. One of his sons, Lawrence Welk, Jr., ended up marrying fellow "Lawrence Welk Show" performer Tanya Falan (they later divorced). Welk left many grandchildren and great-grandchildren. One of them, grandson Lawrence Welk III who usually goes by "Larry Welk", is a reporter and helicopter traffic pilot for KCAL-TV and KCBS-TV in Los Angeles.

Known as an excellent businessman, the maestro, thanks to wise investments in real estate and music publishing, was the second wealthiest entertainer in Hollywood, the wealthiest being Bob Hope. Today (2007) as one travels from Victorville to San Diego on I-15 one passes by many properties that Welk either owned at one time or helped develop.

He enjoyed playing golf, which he first took up in the late 1950s, and was often a regular at many celebrity pro-ams such as the Bob Hope Desert Classic.

After retiring his show and from the road in 1982, the maestro continued to air reruns of his shows, which were repackaged first for syndication and starting in 1986 for public television. Welk also starred and produced a pair of Christmas specials in 1984 and 1985.

He died from pneumonia in Santa Monica, California in 1992 at age 89 and is buried in Holy Cross Cemetery in Culver City, California.
His band continues to appear in a dedicated theater in Branson, Missouri. In addition, the television show has been repackaged for broadcast on PBS stations, with updates from show performers appearing where commercial breaks were during the original shows. The repackaged shows are broadcast at roughly the same Saturday-night time slot as the original ABC shows, and special longer Welk show rebroadcasts are often shown during individual stations' fund-raising periods.

A resort community, developed by the maestro and promoted heavily by him on the show, is still named for Welk. "Lawrence Welk Village" is just off Interstate 15 north of Escondido, California, about 55 miles northeast of San Diego. Lawrence Welk Village is where Welk actually lived in a rather affluent "cottage". There are many other homes like this in this community in which notables such as John Wayne lived or came to stay to get away from San Diego or Los Angeles, as well as folks from his show who lived there, not to mention people in the Hollywood area who also owned or have owned property there. The Village has strict security; in addition, the Lawrence Welk Museum resides on a public access street also named after him, Lawrence Welk Drive.

His organization, The Welk Group, consists of his resort communities in Branson and Escondido; Welk Syndication, which is responsible for broadcasting the show on public television, and the Welk Music Group, which operates record labels Sugar Hill, Vanguard and Ranwood. From the late 1950s to the mid-1980s, the Welk Group was known as Teleklew in which tele stood for television and klew was Welk spelled backwards.

The Best Of Lawrence Welk CD3

The Best Of Lawrence Welk CD2

The Best Of Lawrence Welk CD1

You Are My Sunshine

22 Of The Greatest Waltzes

The Best Of (Vinyl)