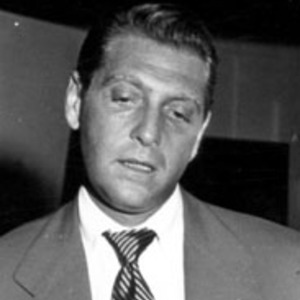 David Rose (June 15, 1910 ? August 23, 1990) was a British-born American songwriter, composer, arranger, and orchestra leader. His most famous compositions were "The Stripper", "Holiday for Strings", and "Calypso Melody". He also wrote music for the television series Little House on the Prairie and Bonanza. In addition, Rose was musical director for the Red Skelton show during its 21-year-run on the CBS and NBC networks. He was a member of Phi Mu Alpha Sinfonia, the national fraternity for men in music.

Recipient of four Emmy awards, David Rose was born in London to Jewish parents and raised in Chicago, Illinois.

He was married for a second time, on July 28, 1941, to the actress and singer Judy Garland. They had no children, though Garland reportedly underwent at least one abortion during the marriage, at the insistence of her mother, her husband, and the studio that employed her, MGM. Garland and Rose divorced in 1945.

He had two daughters with his third wife, Betty Bartholomew. His granddaughter is singer-songwriter Samantha James.

Rose was a live steam hobbyist, with his own backyard railroad.

Rose died in Burbank, California at the age of 80 and was buried in Mount Sinai Memorial Park Cemetery in Hollywood Hills, California.

"The Stripper" was composed by Rose and recorded in 1962. It evinces a jazz influence with especially prominent trombone lines, and evokes the feel of music used to accompany striptease artists. The piece features in the films Slap Shot, The Full Monty and Wallace & Gromit: The Curse of the Were-Rabbit as well as TV series Little Britain and Scrubs. It was also famously used in a parody by British comedy duo Morecambe and Wise, where they danced to the tune while making breakfast. It also is often used in cartoons and sitcoms when an attractive female enters a room.

"Holiday for Strings" became well-known as the theme for Red Skelton's programs. It was also recorded as a vocal by Allan Sherman, with the straight melody but with ersatz lyrics comprised solely of the names of the American states.

Songs Of The Fabulous Thirties

The Stripper (With His Orchestra) (Vinyl)