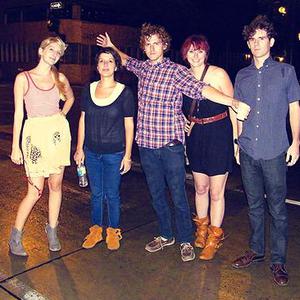 The two men behind the creation of Generationals - Ted Joyner and Grant Widmer - don't know what they've done. They couldn't possibly have that sort of clairvoyance to perceive the effect that one of the songs they wrote has had on the few and will have on the many before the year is up. The song in question - "When They Fight They Fight" - is a HIT recording the likes of which summers cream for, the likes of which makes everyone go a little woozy and a lot bananas.

The song in question - "When They Fight They Fight" - is a HIT recording the likes of which summers cream for, the likes of which makes everyone go a little woozy and a lot bananas. It's the sunlight accentuated. It's a pulsing, slow-drip of Motown bass and slinky guitar, melded with plenty of sing-a-long moments and the most perfect set of pop lyrics about fighting and what seems to be unconditional love through the thicks and thins.

But "Con Law," the debut full-length from this New Orleans-based band doesn't stop there. It's a record that's solid from front to back, serving up songs that are meant for unburdened afternoons meant for strolling, crawfish boils, lengthy and enjoyable conversations with dear friends, never-ending hugs, watermelons being sliced into pieces as thick as four plates and no hint of a sunset.

Joyner and Widmer were formerly of the band The Eames Era, which took its name from the furniture designed by Charles and Ray Eames, known for its sleek and simply beautiful formations. They've expanded those principles and that simplicity into their current musical offerings, packing Generationals songs with enough teeth and muscle so that they could never been heard as over-simplified, but giving them all the touch of effortless flight. It's a trick that Carl Newman and Stuart Murdoch are brilliant at when they're making music for the New Pornographers/A.C. Newman and Belle & Sebastian respectively. It comes off as soft serve, with just the right dash of irascibility, of sexiness and forbidden allure.

Where "Con Law" takes us is into a world that, on the surface, appears to be much like one that's sought after and yearned for with every ounce of fiber that most people have. There's domesticity lingering there - the young people enough beyond their college years to be settling into a wife or a husband and home ownership. It all seems so easy at the outset and then one-by-one, some of the complications seep in and there's water in the basement. It doesn't mean that the story is heading for ruin, just that there's some water in the basement and it adds to the plot a black sort of thickening that only helps to enhance the sunnier details.

It's not a Revolutionary Road, but one that is realistically challenging, where the fights can have peaceful conclusions no matter how many there are and where the hauntings of a life that's being made up of a neighborhood of homes that feature lawns painted green, not grown green are really not all that detrimental. The seriousness comes solely from the perspective and the perspective that Generationals give to the bigger picture is that we can all just get down with it.

We can crack those beers open, we can fire up the grill, we can tussle and scratch, scramble and moan, bicker and love, all to the greater good of what will be the proud essence of what will be written in our obituaries someday - loving father, devoted wife, sweetheart of a son, old softie. It's how everything on "Con Law" makes a body feel, as if all of the different dramas and difficulties that crop up - while never all that flattering or wanted - are livable and able to be seen for what they are, just the small stuff.