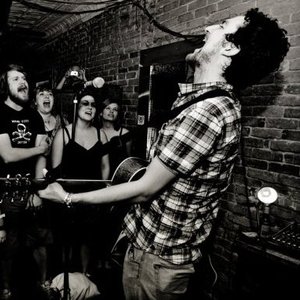 Frank Turner is a solo artist based in the United Kingdom and frontman for hardcore punk band M&ouml;ng&ouml;l H&ouml;rde. He has toured all the Western world (and beyond!) extensively since the demise of his former band Million Dead. Frank Turner started solo acoustic shows prior to Million Dead's break up. The first official performance was at the first Small Town America all dayer at 93 Feet East on September 18th 2004. The solo performances were, in a sense, a sideline to Million Dead.

Frank Turner started solo acoustic shows prior to Million Dead's break up. The first official performance was at the first Small Town America all dayer at 93 Feet East on September 18th 2004. The solo performances were, in a sense, a sideline to Million Dead. They did allow Turner to display some of his own songwriting capabilities (without a band) as well as some covers of songs and bands he enjoyed, in some cases the songs were much re-worked to fit an acoustic atmosphere. Solo performances were also used to help bolster or expose Million Dead to new individuals as well, with some acoustic in-store and radio performances of Million Dead songs.

At the end of February and start of March (2006) Frank went to Oxford to record the "Campfire Punkrock" EP with Dive Dive as the backing band for three of the songs. This EP was released on May 15 2006 on a limited run through Xtra Mile recordings. It sold out after only a few weeks on sale and had to be re-pressed to meet demand.

With Jonah Matranga doing some touring in June 2006 in support of his CD/DVD album "Jonah Matranga" there was some discussion of Frank doing supports with Jonah, this only ended up with one show featuring both at The Peel in Kingston. The discussion however lead to the creation of the Jonah Matranga and Frank Turner split 12" vinyl. Released in the USA on Welcome Home Records and in the UK via Xtra Mile Recordings. The release features Frank covering two songs by American songwriters and Jonah covering two songs by British songwriters. He was recently (September 18 2006) the last ever artist to perform on BBC Radio 1's Lamacq Live program, unveiling two new songs from "Sleep Is For The Week".

The good sales of "Campfire Punkrock" meant good news as this allowed Frank to record his debut album "Sleep Is For The Week" in August and September 2006. Recorded in Oxford with Dive Dive as extra band on a selection of the 13 tracks. The last track, "The Ballad of Me and My Friends", is a live recording from a sold out show at the London Barfly and features the vocal contribution of the (approximately) 200 strong audience during a verse. Those in attendance and gave their names to Xtra Mile Recordings will have their names credited as contributers to this track.

In April 2008, his second album Love, Ire and Song was released to critical acclaim.

His third full-length album, Poetry Of The Deed, was released September 7th 2009, and includes the singles The Road, Try This At Home and Isabel. An accompanying DVD, Take To The Road, was released in March 2010.

Amidst extensive touring in support of Poetry of the Deed, Turner and his then-untitled backing band recorded Rock & Roll, an EP consisting of tracks written at the same time as Poetry of the Deed alongside new material. Following its release, Turner and the band spent twenty days in January 2011, recording their next studio album with producer Tristan Ivemy. The result was England Keep My Bones, the fourth studio album by Frank, released on June 6, 2011, on Xtra Mile in the United Kingdom, and on June 7, 2011, on Epitaph Records worldwide. Preceded by the single, "Peggy Sang the Blues", the album was produced and mixed by Tristan Ivemy, who had previously mixed Love, Ire and Song, Rock & Roll and Campfire Punkrock.

The album's title is taken from William Shakespeare's play, The Life and Death of King John, with Turner noting, "I knew that the album was, for the most part, about mortality, and about Englishness. Shakespeare seemed like a good place to go hunting for some pearls of wisdom, and with a little help from my friend Ben we came across this one, and it just seemed to fit the work really well."

Following the completion of the album, Turner subsequently announced his backing band had named themselves The Sleeping Souls, after a lyric in the track, "I Am Disappeared". The Sleeping Souls are Nigel Powell, Ben LLoyd, Tarant Anderson and Matt Nasir.

Frank latest release is England Keep My Bones' third single, If Ever I Stray, which is backed by b-side Sailor's Boots (Previously known as 'Rod Stewart') and was released on August 29, 2011.

Trivia: Songfacts reports that Turner had a privileged upbringing, thanks to his grandfather, the former chairman of high street retailer BHS, Sir Mark Turner. Brought up in a manor house by his city investment banker father, Roger Turner, and mother Jane, the daughter of a bishop, Turner was educated at Eton alongside Prince William.