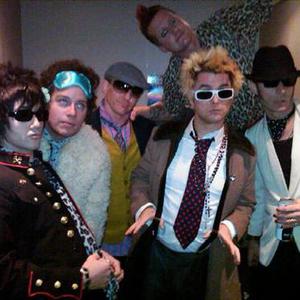 Foxboro Hot Tubs is a side project of the members of popular alternative rock band Green Day. Formed in 2007 in San Francisco, California, United States, the band was created as an outlet for 60's garage influenced music the band was recording at the time. The band consists of Billie Joe Armstrong (lead vocals), Mike Dirnt (bass), Tr&eacute; Cool (drums), Jason White (lead guitar, vocals), Jason Freese (keyboards) and Kevin Preston (guitar). Armstrong, Dirnt and Cool are members of Green Day and White and Freese are touring members for Green Day and Preston is a member of Prima Donna.

The band's sound is influenced by 60's garage acts such as The Seeds, The Sonics and The Electric Prunes.

On December 8, 2007, their first album, entitled Stop, Drop and Roll, became available for free download on their website.

Another major change compared to their main musical project is the choice of sound and instrumentation/amplification. A more vintage, rock-garage, high and slashing sound is pursued, and is evident the use of classic Fender-like combo amplifiers for the guitars (substituting the famous Marshalls Green Day always used) and probably a Fender Bassman 300 PRO for the bass (after switching from Mesa/Boogie to Fender for American Idiot, Mike Dirnt has supposedly chosen the most vintage sounding bass head existing among Fender's present production). The drums set seems mainly unchanged, but Tr? Cool's style has always resided in his hands rather than else.