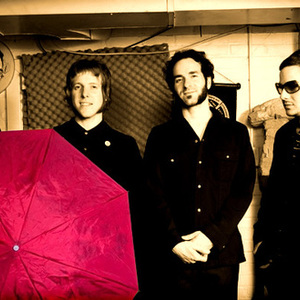 Whatever your taste in popular music you will find it satisfied in the songs of The Black Hollies. Their music occurs within and simultaneously destroys the pre-existing frameworks like any true revolution whether musical, spiritual, political, or artistic. The Black Hollies approach to songwriting, like revolution, is born of a single unfettered notion; the will to create that which has never been thought of before.

As a group, Scott Thomas Bolasci, Jon Gonnelli, Justin Angelo Morey, and Herbert Joseph Wiley V are four seasoned instrumentalists with a reverence for rock and roll's past. 3/4 of the band honed their chops over a lifetime of touring and studio work as members of Rye Coalition, while the other was simply born with the ability to create magic behind the kit. Combined, the 4 create sounds that are new, exciting, colorful, rudimentary, and complex. Their sound speaks in pictures and it channels pop music's vast vernacular by revamping the idioms of rhythm and blues. In the vein of The Yardbirds, The Pretty Things, The Who, The Pink Floyd Sound, The Cream, the spirit of Stax, and a lifetime of immersion in rock, soul and their accompanying revelations, The Black Hollies set out to create future classics by harnessing relics left by those who came before them.

Not content to compromise their vision, The Black Hollies submerged themselves in their own home crafted studio under the trained ears of long time friend/engineer Mike Olear and then completed the project with the assistance of Alap Momin. The end result is their debut LP Crimson Reflections, a remarkable outpouring of toe-tapping beauty from the center of the universe. Scott Thomas Bolasci is The Big Bang Theory spontaneously nurturing the hip shaking swing into existence with his precise interpretation of time. Jon Gonnelli's rhythm guitar efficiency is planet earth to Herbert Joseph Wiley V's outer-space lead guitar time travel. Electric bassist/lead vocalist Justin Angelo Morey's seemingly simple odes to beautiful women cloud the listener's looking glass, revealing upon closer inspection the imagery of the blues, the weeps and the wails of addiction and desire.

In a brief existence The Black Hollies have already made their impact. They've played with Ted Leo/RX, Blue Cheer, Joan Jett, The Greenhornes, and Detroit Cobras, and they've rattled the walls of every room they load into. Their well-tailored look is aligned with their song structures' adherence to form, while the playing, the happening of it all, the revolution, and the sound itself, are all departures from form into the nether regions of FREAK-OUT. Crimson Reflections is a journey through the looking glass mind. It is the culmination and aural paradox of making too much happen in not enough time, an echo of what we miss with each blink, breath, and passing moment. Too much can be said and not enough understood - better heard than written about, as the hearing IS the seeing. Ladies and Gentlemen, we give you The Black Hollies.

Somewhere Between Here And Nowhere

Softly Towards The Light