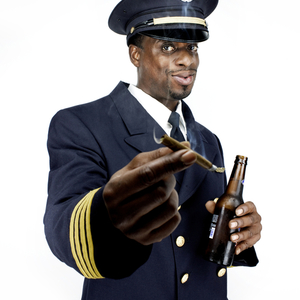 Devin the Dude is a Houston-area rapper. Though relatively well-known among the underground hip-hop community during the mid-to-late 90's, Devin did not achieve mainstream success until his appearance on Dr. Dre's 2001 album. Besides sex, relationships, ridin' trucks, smokin' reefer, drinkin' beer, partying, and conscious or proverbial themes, much of Devin's work is also light-hearted and comically self-deprecating.

In 2008, he ended his 15 year relationship with Houston based Rap-A-Lot Records because the label failed to renew his contract.[2] Later that year, he signed with indie label Razor & Tie.[3]

Despite being a critical success, Devin the Dude has not achieved success in the mainstream but continues to be a well-known underground hip-hop artist. The New York Times has called him "A brilliant oddball with a spaced-out flow."[4] In addition, he has been called "Rap's best-kept secret" and "Your favorite rapper's favorite rapper."[5] In 2007, he appeared in a documentary titled Screwed In Houston produced by VBS/Vice Magazine that details the history of the Houston rap scene.

Still Rollin' Up: Somethin' To Ride With

One For The Road