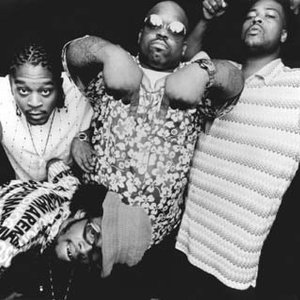 Goodie Mob, based in Atlanta, Georgia, is widely considered one of the founding hip hop acts of the (commerically viable) Dirty South movement. Members Cee-Lo (Thomas Callaway), Khujo Goodie (Willie Knighton, Jr.), T-Mo Goodie (Robert Barnett), and Big Gipp (Cameron Gipp) make up the group, which has been functioning since 1995. "GOODIE MOb", as it's written on their album covers, means the "GOOD DIE Mostly Over bullshit". Cee-Lo notes in a song off the Soul Food album that, " you take out one 'O' it stands for 'GOD Is Every Man Of blackness.' "

"GOODIE MOb", as it's written on their album covers, means the "GOOD DIE Mostly Over bullshit". Cee-Lo notes in a song off the Soul Food album that, "[If] you take out one 'O' it stands for 'GOD Is Every Man Of blackness.' "

Its members were all born in Atlanta, and the group is based there with the rest of the Dungeon Family, a collective which includes OutKast, Witch Doctor and P.A. (Parental Advisory). Goodie was first heard reciting haunting politically charged poetry on several songs from OutKast's first album Southernplayalisticadillacmuzik. His reputation as a poet, thinker and social commentator is legendary in the southern hip-hop community.

Cee-Lo was the most visible member of the group prior to his departure in 2000 due in part to his distinct voice, while Big Gipp has made several rounds on other Dungeon Family members' albums, and T-Mo and Khujo form a duo within the group called The Lumberjacks.

Goodie Mob's debut was the Gold-certified album Soul Food in (1995). Produced by Organized Noize and critically acclaimed, the album went gold. It was on this album that the phrase Dirty South was actually coined, with a song of that same title. This album touched on many social and political issues such as racism, discrimination, geo-politics, and gentrification. Although the album dealt with such heavy issues, some songs still carried a lighter tone, such as "Soul Food," in which the crew expressed their love for home cooked meals. Along with Southernplayalisticadillacmuzik, this album put Atlanta's rap scene on the map.

The Mob's sophomore release was Still Standing in 1998, on which they continued their tendency towards social commentary, and Cee-Lo's penchant for singing began to show through more. The album was also produced by Organize Noize, except for contributions by DJ Muggs (which would lead to Goodie Mob's contribution on Soul Assassins I) and Mr. DJ. During this period the group made a cameo appearance in the film Mystery Men, with Cee-Lo crediting himself by his birth name, Thomas Callaway (though he refers to himself as "Carlito Green" in the liner notes). Still Standing was the group's second gold-selling effort. On the front and back covers, the letter "O" in "Mob" contained a chilling silhouette of a hanged man in the center.

Feeling pressure from the increasing popularity and sales of their fellow Dungeon Family group OutKast, Goodie Mob decided to sign with Arista Records for their third album. The record veered away from their gritty style that permeated their successful previous releases, instead incorporating lighter beats and party related subject matter, which many fans perceived as selling out in an attempt for mainstream popularity. The social tone which had pervaded their earlier releases was absent; one track on the album, "All A's," was criticized for reportedly containing homophobic lyrics. During production, unhappy with the project's direction, Cee-Lo abruptly left to pursue a solo career. Arista dropped the group following poor sales of the album.

The fourth album from Goodie, not featuring Cee-Lo, was something of a return to their earlier style, though fans were unhappy with the lack of Cee-Lo's presence. Many thought the "monkey" referenced in the title and shown on the cover was a reference to their prodigal groupmate, though the group claims it actually represents the music industry. Released the following year, Cee-Lo's second solo album Cee-Lo Green... is the Soul Machine featured a song called "When We Were Friends," which many also took for a diss to his former group.

One Monkey's poor reception led Big Gipp to briefly leave the group as well, and T-Mo and Khujo released an album under the name The Lumberjacks called Livin' Life As Lumberjacks. The album continued the trend of somewhat lessened social commentary, getting into the crunk style that by then had pervaded Atlanta's music scene. Though Cee-Lo was still absent, Big Gipp appeared twice on the album to form the trio once again on the tracks Superfriends and 24/7/365.

It has been reported that all four Goodie Mob members are back on good terms and have reentered the studio to release a brand new album. Cee-Lo and Big Gipp have both referenced this in multiple interviews. No release date has been set, nor any details concerning the possible album released.

The four members recently appeared on stage together on October 1, 2006 following a Gnarls Barkley show, stating that they were back together or at least on good terms. No details were given concerning a possible reunion album at the time.

Age Against The Machine (Deluxe Edition)

One Monkey Don't Stop No Show

One Monkey Dont Stop No Show