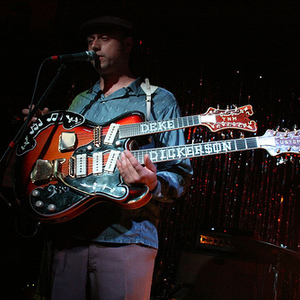 A popular American guitarist with respect for righteously pure retro sounds, Deke formed the midwestern hot-rod surf-punk band Untamed Youth at age 17 in his hometown of Columbia, Missouri. They released a total of eight full-length albums, toured in old hearses, and in 1991, Deke moved to Los Angeles and joined Dave Stuckey to form the "Hillbilly Power" act known as the Dave & Deke Combo, a fruitful twangin' partnership that yielded two albums and a much-touted 2005 reunion at major rockabilly festivals.

Embarking on a solo career in 1997, Deke formed his band Deke Dickerson and the Ecco-Fonics who released three albums for the High Tone label. Constant touring led to festival appearances in the US and Europe, and support slots for fans of Deke's like Cake, Mike Ness, and the Reverend Horton Heat (who has said: "Deke Dickerson is the best rockabilly guitarist in the world!").

Deke is also a respected writer and americana music historian having written essays, articles and liner notes on influences of his such as Faron Young and Gene Vincent. He is well known for his regular column in Guitar Player magazine and recently authored two enormous essay projects for Bear Family's 2007 Merle Haggard box sets as well as liners for labels like Del-Fi, Sundazed, and others...

Deke has run his own Ecco-Fonic record label and been involved in numerous musical projects including The Go Nuts, The Beatnik Bandits,The Sprague Brothers, and even singing for the normally instrumental combo Los Straitjackets. He has also brought in personal heroes to record with on his records including Hadda Brooks and the late greats, Earl Palmer and Claude Trenier.

Rhythm Rhyme & Truth (With The Ecco-Fonics)