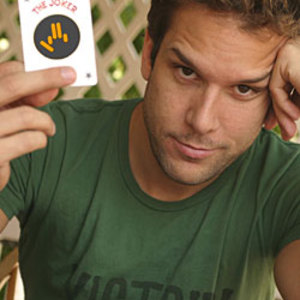 His comic material is mostly observational humor. His recent routines include such diverse topics as car accident mayhem, Cook's time spent working at Burger King and assorted geek humor. Cook often refers to specific places or things using his own slang terms. For instance: Burger King is the "BK Lounge" (a phrase first used by De La Soul), Walgreens is "The Wall" , and a sandwich is a "sangwich". He also popularized the acronym BAMF, short for Bad Ass Mother Fucker, a slight variation on the more-common and widely-used "BMF", or "Bad Mother Fucker". Among Cook's numerous television credits are performances on Comedy Central Presents and Comedy Central Bar Mitzvah Bash.

He is often referred to as 'the most popular guy on MySpace' (next to Tom Anderson, the creator of the service), because at one time he approved every friend request he received -- recently hitting one million.

When he was a teenager, Dane discovered his comedic talent when his father, former radio personality George Cook, gave him a tape recorder and microphone. He was inspired by watching and listening to a variety of comedians, including Bill Cosby, Johnny Carson, George Carlin and even Red Skelton. In seventh grade he watched Saturday Night Live one night and saw Martin Short performing his character Ed Grimley. He suddenly realized a goal in life: to be on the show.

He started performing stand-up comedy in 1990. By 1995, Cook was performing stand-up comedy every night, usually in Boston and, when he made it to Los Angeles, at The Laugh Factory. He stated in a 2005 interview with Entertainment Weekly that he "never walked toward a stage and felt heavy. Ever. Even in bad places, I always learned something." Also in 1995, Cook made his television debut as Kyle in five episodes of the short-lived ABC series Maybe This Time, starring Marie Osmond and Betty White.

In 1999, he made his first (albeit brief) appearance in a major motion picture as "The Waffler" (a superhero who uses a waffle iron and "truth syrup" to fight crime) in Mystery Men. A year earlier, he was featured on Comedy Central's stand-up comedy showcase Premium Blend and, the following year, Comics Come Home. It would begin a partnership with the cable channel that would help launch Cook's career to new heights. He made his own half-hour feature segment on Comedy Central Presents in 2000.

1999 also saw Cook starring in the straight-to-video Dennis Rodman vehicle, Simon Sez. Often thought to be a sequel to the mildly successful Jean Claude Van Damme film, Simon Sez actually has nothing to do with Double Team. In the film Cook plays Rodman's partner, Nick Miranda. The film was directed by Kevin Elders, previously known as the screenwriter for Aces: Iron Eagle III.

Two years later, Cook pooled $25,000 of his own money from savings and retirement accounts and launched DaneCook.com, his own interactive website to help further his career and help stay personally connected to his fans. Although other comics mocked him, his website, along with his MySpace account, turned out to be a success.

In 2003, Cook released his first comedy album, Harmful If Swallowed, which also included a DVD of his appearances on Comedy Central.

In 2003 Dane Cook also released the film 8 Guys, which he wrote, directed, and starred in.

In 2005, Cook launched a nationwide tour dubbed "Tourgasm" (highlights from which aired as "Dane Cook's Tourgasm." It debuted on HBO June 11, 2006) as a follow up to his second album Retaliation, which debuted at #4 on Billboard magazine's Top Albums chart, the most successful comedy album debut since Steve Martin's A Wild and Crazy Guy in 1979. Cook wore a T-shirt depicting Steve Martin and "A Wild And Crazy Guy" at the 2006 MTV Movie Awards.

The album's success launched a slew of public appearances and magazine articles that fall, including a three-minute routine on the MTV Video Music Awards on August 28. He also performed three sold-out shows in two nights at The Theater at Madison Square Garden, a 2,500 to 5,000 seat venue, in mid-September without any press but his own website.

During a May 2005 appearance on Jimmy Kimmel Live, Cook parodied Tom Cruise's "couch jumping" Oprah appearance and made a "tattoo" of Katie Holmes (actually a picture taped to his back), barging into the women's restroom to get her.

During a October 2005 appearance on The Tonight Show, he kissed Charlize Theron's butt after she allowed him to do so. Cook was re-enacting a previous joke/act in which Charlize kissed Shirley MacLaine's butt at a Premiere magazine tribute to women in Hollywood.

He also appeared and performed on Dave Attell's Insomniac Tour.

He finished his own television pilot called Cooked, which he is writing and starring in, soon afterwards.

On December 3, 2005, Cook finally realized his dream of hosting Saturday Night Live. His appearance was unique because he was one of the few stand-up comedians (as opposed to actors) to appear as guest host for the show. He performed the longest monologue in the show's history while using a handheld microphone, another rarity for SNL. The episode was one of the highest-rated SNLs of the season.

On January 13, 2006, after months of keeping a "BIG secret" from his fans, he announced via his website an April 15 gig at Boston's TD Banknorth Garden where his first HBO special was eventually filmed. A documentary series and a scripted program are also in the works for HBO. In the week prior to the televised gig, he performed at the Mandalay Bay Resort in Las Vegas (April 8) and Allstate Arena in Chicago (April 13), the largest venues he's ever performed in those cities.

Sadly, his mother, Donna Cook passed away after a long bout with cancer on July 3rd.

Cook was in Santa Fe, New Mexico working on a movie called Employee of the Month, a comedy co-starring Jessica Simpson (who he's been linked to romantically by the tabloid press), Dax Shepard, Efren Ramirez and Harland Williams.

He is also currently filming the psychological thriller Mr. Brooks in Shreveport, Louisiana with Kevin Costner. In 2006, he was named in Time magazine's list of the 100 most influential people of 2006.

Cook plans on touring the country with other comedians including Steve Carell.

While shooting a movie in Vancouver, Dane Cook made the local papers for his behavior in a comedy club. His actions were called "very immature". Dane Cook has yet to make comment on this event.

The Super Finger or Su-Fi is a hand gesture. It was not created by Dane Cook, although he has adopted as such. It consists of raising the middle finger, ring finger, and thumb on the same hand while lowering (or curling) the index and pinky fingers. Cook's website explains his idea behind the Su-Fi:

"One night I did a bit on stage about 5 years ago at the Laugh Factory. I was talking about how the finger is lame now and it's lost its pizzazz. I said I wanted to upgrade the finger and so from now on people should use both the ring finger coupled with the middle finger. I called it the SUPERFINGER (or SU-FI)."

Cook is considered to be double-jointed.

In 2005, Cook started his own company to produce his albums and videos, which he named Superfinger Entertainment.

After the release of his immensely successful CD / DVD Retaliation, many fans of comedy took note of three bits on Cook's CD. On June 10, 1999, comedian Louis C.K. performed stand-up on Late Night with Conan O'Brien, one of the bits being about naming kids and wanting to name his kid with one letter repeated many times. On CK's debut CD, Louis CK: Live in Houston, which was released in 2000, CK had a bit called "Itchy Asshole". CK has also performed a routine on both his CD, Late Night, and other television programs called "Guy on a Bike", which was a routine about witnessing someone struck by a car and wondering how quickly to warn someone before the accident. In 2005, Dane Cook performed and released three similar routines on Retaliation. CK commented on the similarities, noting what he considered clear examples of cribbing material, but said that he did not intend to act on these findings. For his part, Cook has yet to respond.

On Saturday, July 22, 2006, Dane Cook was played off the stage at Yuk Yuk's comedy club in Vancouver. Cook was in town for six weeks shooting a film with Jessica Alba and his agent had requested a slot for him, after that night's headliner.

Rough Around The Edges: Live From Madison Square Garden