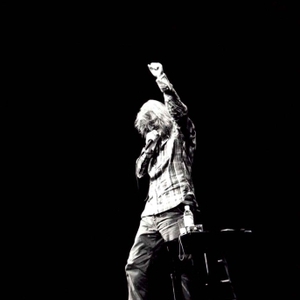 Mitchell Hedberg (February 24, 1968 ? March 29, 2005) was an American stand-up comedian known for his odd subject matter, stylistic elocution and memorable routines that often consisted of a string of one-line non sequiturs. He died at the age of 37 from multiple drug toxicity. Hedberg was born in Saint Paul, Minnesota. He was the son of Swedish immigrants Arne and Mary Hedberg, and was married to Canadian comedian Lynn Shawcroft on February 25th, 1999. He graduated from Harding High School in Saint Paul.

Career: He began his career in 1989 playing open mic nights in south Florida. Two years later, in 1991, he moved to Seattle and began doing the same there, where his popularity increased. However, Hedberg did encounter some degree of difficulty. It took him more than a few years to come up with a good deal of material, and he also needed to conquer his stage fright, which was so intense that it left a mark on him throughout his career, sometimes even leading to his performing with his eyes closed, which he often incorporated into his jokes.

He first began achieving national exposure with a special on Comedy Central. Hedberg appeared on The Late Show with David Letterman ten times and became one of the show's most successful American comedians. Hedberg was deemed the "Kurt Cobain of Stand Up Comedy" because of his long hair, laid back attitude, drug addiction, and Seattle background. Hedberg was set apart from his stand-up comedy peers by many traits, including his unique pronunciations, an "abrupt" style of punchline delivery, and a curious stage presence that was professional-but-casual and confident-but-shy.

Mitch's joke topics rarely, if ever, treaded into smutty or contentious territory, instead focusing largely on deft wordplay, clever non sequiturs, innocent whimsy, and imaginative "object" observations. Although his stand-up delivery occasionally contained so-called "four-letter words," such language was never central to Hedberg's gags, instead being just exclamation/filler phrases during his stage discourse (his jokes rarely suffered when he performed them on television with the curses omitted - some might argue that they were better for the more universal appeal).
His onstage persona, though slightly nervous, was always quite endearing; he would happily joke with the audience if they hadn't reacted particularly well to a joke. He was happy to criticise his own weaker jokes, such as his statement on Strategic Grill Locations: "That joke was just a carbon copy of the last joke." His jokes ranged from compact one- or two-liners ("I'm against picketing, but I don't know how to show it.") to slightly longer material (usually with multiple punchlines) in which he would take everyday ideas or situations and pick out certain aspects at which to poke humor (the Dufrenes joke is a good example of this). Mitch was also a three-time performer at the Montreal Just for Laughs festival.

Death: Hedberg was known to be a drug user. In May 2003, he was arrested in Austin, Texas, for possession of heroin. In 2004, Hedberg's drug use seemed to spiral out of control. At a September 23 performance in Phoenix, Arizona, Hedberg appeared on stage intoxicated, nearly collapsed, and asked the audience for drugs, which he then ingested in front of the crowd. At several other performances, he openly asked the audience for "any drugs" they might have, including Xanax and other prescription drugs.

Late in the evening on March 29, 2005, Hedberg was found dead by his wife in a Livingston, New Jersey, hotel room. He was 37 years old. His death was first announced by Howard Stern on his morning talk show (on which Hedberg had appeared many times, including less than two weeks before his death) and later confirmed by the Saint Paul Pioneer Press. Many people who learned of his death thought it to be an April Fool's joke, because it was announced April 1st on his official website. Hedberg had reportedly been preparing for his first HBO special, which was his main goal to achieve as a comedian. The high school he went to in St. Paul put his picture up in the student of the month column following his death, to show how greatly loved he was by the faculty that had taught him, and the many students that had seen him perform. Hedberg was born with a heart defect for which he received extensive treatment as a child. Though this condition initially had been cited as a possible cause of death, in May 2005 the New Jersey medical examiner's office reported "multiple drug toxicity," including cocaine and heroin, as the official cause of death.

Results of the autopsy and toxicology reports were first reported by journalist Peter Hyman in the January 2006 edition of Spin magazine.
Hedberg could be heard as the voice of Jimmy John's radio advertisements during the months leading up to and after his death. (Since his name was never used in the ads, the company likely felt there was no need to pull the ads after he died.) He also was the voice of the Atlanta Thrashers "Hockey Love" ad campaign in 2002-2003. Every performance of the Insomniac tour, headed by Hedberg friend and former tourmate Dave Attell, featured a toast to Hedberg at the end of the show.

Do You Believe In Gosh