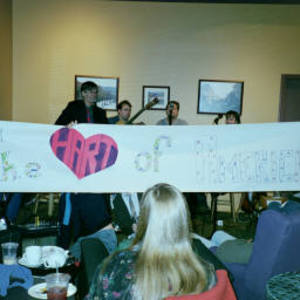 One of the few folk singers who is trained as a clinical psychologist, Dan Hart is funny and engaging, with self-deprecating humor. He has appeared on the "Doctor Demento" show and "Coffee and Cartoons", and is part of the close circle of comedy-folks including Sponge Awareness Foundation, Throwing Toasters, Squish and Kornflake. He issues an annual CD single of with one or more demented Christmas songs. His 2001 release "The Life of Dan" includes such favorites as "Tofu Cowboy" and "Ritalin". He has been touring with Carla Ulbrich lately, although fate often intervenes to thwart their plans.

Santa God and Other Blasphemies

Apocalypse Now And Then