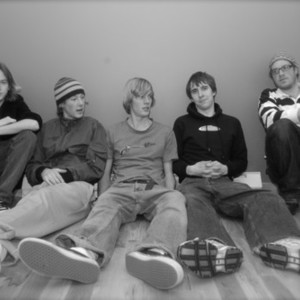 The members of Current Swell no longer live together under a single roof ? as they did years ago, when the group first came together as a unit ? but the bond between the four friends is stronger than ever. Touring the world for the better part of five years, from Brazil to Australia, often has that effect. Current Swell's years of experience on the road can be heard ? and felt ? in the nooks and crannies

when the group first came together as a unit ? but the bond between the four friends is stronger than
ever.

Touring the world for the better part of five years, from Brazil to Australia, often has that effect.

Current Swell's years of experience on the road can be heard ? and felt ? in the nooks and crannies
of Long Time Ago, the new full-length from this rootsy Victoria, B.C. quartet. The record shifts
between upbeat folk (the title track, Long Time Ago) and singalong-ready roots rock (the first single,
Too Cold) with a fluidity and ease that could only come from continual touring.

The band originally wanted to call its fourth record People Not Places, as if to signify its new lyrical
direction. ?We used to write about traveling, because that's all we did for a while,? says singer-
guitarist Scott Stanton. ?But on this record, we wrote mostly about people in our lives.?

Friends, acquaintances ? even strangers ? have been an integral aspect of Current Swell's personal
and professional development. Decidedly grass-roots, the band has developed a strong online
following over the years, dating back to the independent release and promotion of its previous
recordings, So I Say (2005), Trust Us Now (2007), and Protect Your Own (2009).

Fans have remained steadfast in their support, something the members of Current Swell do not take
for granted. When the band earned first place at Vancouver's Peak Performance Project (a 2011 radio
contest which awarded the group $100,500 for top prize), the first people on Current Swell's thank-
you list were their fans.

?The online community has always backed us,? said singer-guitarist Dave Lang, addressing the group's
considerable presence through iTunes and YouTube. ?That is a big reason for our success.?

Steady momentum at the grass-roots level (the group's video for its campfire-friendly single, Young
and Able, became a word-of-mouth YouTube success in 2010) has now translated to the stage, where
Current Swell shines. Their ability to capture a crowd was honed the old-fashioned way ? through
constant practice. Current Swell has always tweaked things as needed, careful not to move in a
direction that feels inauthentic.

The band, which also features drummer Chris Petersen and bassist Ghosty Boy, started its career
with the most modest of expectations, playing shows in settings that ranged from backyards to
beaches. ?When we first got together, we just started writing music for fun,? Stanton says. ?Then we
got an opportunity to perform, and then we got an opportunity to tour. It wasn't something we ever
chased too passionately at first. A lot of things just fell into place for us.?

The quartet struck upon a rhythm soon after, the size of its concerts increasing in tandem with its
rapidly progressing talent. Momentum kept Current Swell moving forward in the years that followed,
culminating last summer with a Canada Day concert before 45,000 people at the B.C. Legislature, one
of the largest concerts of its kind ever in Victoria.
That level of accomplishment (when coupled with sets in support of everyone from the Tragically Hip
and Xavier Rudd to K?Naan, K-OS, The Beach Boys and more) suggests a band long-removed from its
learning-on-the-fly early days. That didn't happen by accident.

?We're all much more educated and knowledgeable about our career nowadays,? Stanton says. ?We
feel like we know how to do this for a living.?

Despite years of careful planning and intuitive, thoughtful decisions, some things remain beyond
Current Swell's control. Case in point: Brazil.

Through a mixture of circumstance and happenstance, the members of Current Swell are now the
beneficiaries of a large and loyal following in Brazil, the largest country in South America. The group
has just returned from a tour of the country, a trek which saw Current Swell headline two large
festivals in Rio de Janeiro and S?o Paulo, among the largest cities in the world.

?We'd get an e-mail here and there, ?Please come to Brazil, I'm a huge fan,' which was hilarious to
read,? Stanton says of the group's throng of Brazilian fans. ?But then we'd go on YouTube and there
was a bunch of people covering our songs. Someone even covered one of our music videos, lip-
syncing all our lyrics.?

Current Swell plans to return to Brazil at its earliest convenience ? not for money, or fame, or
opportunity. If anything, they want to do it for their fans.

That has become Current Swell's trademark, in a sense. And with the release of Long Time Ago, the
group has a new reason to get back out on the road again.

When to Talk and When to Listen