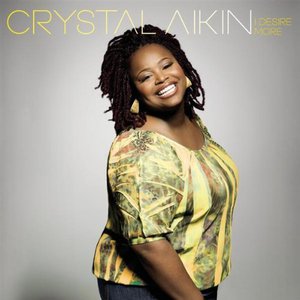 Crystal Aikin is the winner of the popular gospel competition, Sunday Best, on BET. She is a powerful alto with an amazing range. The following bio was taken from her page on Verify Records' website: When Crystal Aikin boarded a plane in her hometown Tacoma, Washington, bound for Los Angeles to participate in a singing competition, she had no idea that this would be the opportunity that would change her life forever.

When Crystal Aikin boarded a plane in her hometown Tacoma, Washington, bound for Los Angeles to participate in a singing competition, she had no idea that this would be the opportunity that would change her life forever. A registered nurse with an anointed singing voice, Aikin hadn't even heard about the show when a woman who didn't know Crystal personally but had heard her sing tracked her down and encouraged her to audition.

The competition was Black Entertainment Television's first all gospel talent show Sunday Best and, several weeks later, the church girl from the Pacific Northwest beat out some of the country's best church singers to become the 2008 BET Sunday Best winner.

As the winner, this single sister with the pretty smile and bubbly personality who just loves to sing gospel and inspire people to worship God, received a major recording contract with Zomba Gospel, the largest gospel label in the world, and a 2008 Toyota Camry. She was beyond ecstatic and brimming with gratitude for the opportunity to spread the ?good news? through song world-wide.

Now, with the release of her self-titled debut solo CD, she is poised to put her fresh, new sound on the gospel map.

Crystal's gospel journey began as a child growing up in Tacoma. She remembers, ?I grew up in Altheimer Memorial Church of God In Christ in Tacoma. I sang in the children's Sunshine Band. I honestly didn't think that I could sing. I just think they gave me the mic and I was like ?Okay, now I'll start singing!' I really did like air directing. That's when the music is playing and you're directing the air which is your choir! I never thought that I'd ever actually direct. But as I got older, young leaders in my church started going off to college, and I fell into the position of directing and more lead singing. And that developed my leadership skills for singing in groups in the church because neither of my parents were soloists.?

Counting Gospel artists Yolanda Adams, Lisa Paige (of Witness), The Clark Sisters, The Winans and Bebe and CeCe Winans among her musical influences, by the time she reached her twenties, Crystal had become a seasoned church singer making a name for herself in the Tacoma-Seattle area while also obtaining a Bachelor's degree in Biology and Psychology. But it wasn't until the late 1990s when she joined a local singing group that Crystal's gospel journey would take her into the professional arena.

?My first appearance at GMWA was with a group called Soul. We travelled and performed extensively in the 90s, and we received a lot of amazing visibility and opportunities. Before that, I was in a local group called Heaven Sent Us, and that is when I really developed as a vocalist and stage performer. But my time with Soul was when I first began getting singing exposure outside of Tacoma,? says Crystal.

After leaving Soul, Crystal returned to singing in and around her hometown. It was also during this time that she lost her father. ?His words were embedded in my spirit - to make sure I could take care of myself ?and that's when I made the decision to go back to school. In 2005 she returned to college and obtained a nursing degree, following in the footsteps of her mother - a Registered Nurse and a Professor of Nursing at Crystal's alma mater, Pacific University.

Crystal's kind hearted nature and love for helping people is what drew her into nursing. Her desire to lead people to Christ through her music ministry is what keeps her singing gospel music.

?I am a worship conductor and singing for me has so much purpose; I don't play around with it. We all have gifts and talents. Sometimes we take them places we shouldn't. But for me, it is so important to covet my gift and to use it wisely. I believe that God has put a spiritual anointing on my voice to awaken the spiritually asleep and for deliverance and healing.?

When asked to describe her album's music, Crystal says, ?It's a potpourri of musical sounds. And we've got something on it for everyone. I am so glad I'm from Washington State, one of the least churched states. We're not in the Bible belt. So we don't get gospel styles so heavily ingrained in us. We are a grunge and rock alternative state, the home of rock legend Jimi Hendrix. And with that, we are so well blended and open to appreciate it all styles of music. So I couldn't help but make sure that a variety of music was captured on my album.?

That variety of music styles on her CD manifested on her CD as a mix of Urban Contemporary Gospel and Contemporary Gospel sounds with a splash of Traditional Gospel and a touch of Rock and Jazz. Although she says she loves every song, Crystal does admit to having three favorites on the project, ?My first favorite is the powerful ballad ?What If,? produced by PAJAM. When you listen to the words it's really an awesome song. What if God said no? What if he opted to not die? What if he opted to not give us healing? What if he opted not to give us miracles? Do you know what kind of world and situation we'd be in? It's a song that provokes thought and thankfulness for God's presence in our lives.

Another one is ?The Cloud,? produced by Derek Clark. It has a rock feel to it. And it's an encouraging song for anyone who feels down, ashamed, unworthy and hopeless. The song talks about how the clouds have rolled away and your sins have been erased. So say goodbye to yesterday. Say good-bye to days of gray!

Then there's ?He's So Worthy? by Asaph Ward. This is a certifiable ?gospel joint!' It's full of energy and spectacular rhythm, but what grips me about the song is that it has a praise and worship feel. The music is slamming but what gets me more are the words, because He's worthy of all the praise and all the glory. It provokes you, no matter what you might be feeling at that moment; you're like ?Umph! He's so worthy!'?

Other stand outs on the project include the mid-tempo, contemporary ?Lord You Reign Forever.? Produced by Dre & Vidal, it's a soothing song that reminds you that the Lord reigns high above your circumstance and He will always be there for you.

The Dre & Vidal produced jazz tinged ballad ?Turn to Him? is a testimonial tune about a soul being lost and confused and finally turning to God through prayer to be saved.

The tear evoking, soul-piercing traditional ballad ?Even Me,? produced by Gerald Haddon, tells the story about how God will use the broken and seemingly unworthy individual to accomplish his perfect will.

From song to song, Crystal Aikin's self-titled debut CD will inspire and bless a multitude of souls from a myriad of backgrounds with its colorblind messages of love, faith, hope and worship.

And what is Crystal's hope for her God inspired release? She proclaims, ?My desire for my album is that people will be inspired to bless God and worship God. I want people to get the Crystal artistry, but have the God experience.?