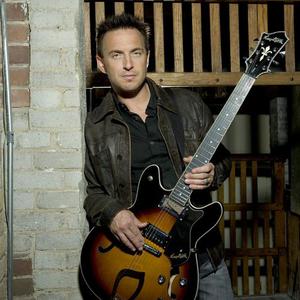 Six-time Juno award-winner Colin James has driven his 15-album, 25-year career with his blues influenced guitar mastery and soulful vocals. Colin James was only 18-years old when he captured the attention of guitar legend Stevie Ray Vaughan, who marveled at the prodigious talent, decided to take him on the road through the Canadian prairies, and later the United States. It wasn't long after that the young musician began opening for the likes of John Lee Hooker, ZZ Top...

Colin James was only 18-years old when he captured the attention of guitar legend Stevie Ray Vaughan, who marveled at the prodigious talent, decided to take him on the road through the Canadian prairies, and later the United States. It wasn't long after that the young musician began opening for the likes of John Lee Hooker, ZZ Top, Steve Winwood and Keith Richards, James was also the first to be signed to the Virgin America label, and his 1988 self-titled debut Colin James was the fastest-selling album in Canadian music history featuring the smash hits "Why'd You Lie??, ?Voodoo Thing? and ?Five Long Years". He followed up with the strong 1990 sophomore release, Sudden Stop, which featured the top three radio hit "Just Came Back", and has since maintained the integrity of a truly enduring artist.

In 2008 he took home three Maple Blues Awards (Toronto Blues Society), which included Entertainer of the Year, while his release Limelight also went gold in Canada.

Colin James released his twelfth album Rooftops and Satellites on October 6th, 2009, and it is a return to his guitar Blues-Rock roots. The album was primarily co-written by Tom Wilson of Junkhouse, Blackie & The Rodeo Kings and Thomas "Tawgs" Salter, co-writer and producer of Lights' debut and Josh Groban's Awake, and it has generated four Canadian radio singles, ?Man's Gotta Be A Stone?, ?Lost Again?, ?Wavelength? and ?Johnny Coolman.?

2011's 'Take It From The Top: The Best Of' pays tribute to Colin's James' 23 year career and also serves to celebrate Colin's return back to the EMI/Virgin roster, where he started. This Greatest Hits collection also features two newly recorded tracks, ?It's Gonna Be Alright? as well as an innovative cover of the Buddy Miles' classic ?Them Changes?, that were recorded in Vancouver with veteran producer Bob Rock (Michael Bubl?, Metallica), reuniting the two after almost twenty years.

On June 12th, 2012, Colin James released his fifteenth album, appropriately entitled FIFTEEN, which was produced by Joe Hardy (ZZ Top, Brooks & Dunn, Jeff Healey, Steve Earle), who had handled three of Colin's previous album productions including his successful sophomore release. Colin co-writes with Gordie Johnson (Big Sugar, Grady) on the opener ?Sweets Gone Sour? and the rocker ?I Need You Bad.? Colin also re-teamed with Tom Wilson and Thomas ?Tawgs? Salter on four high-octane tracks, including the bluesy ?No Time to Get There? and the driving ?Stone Faith,? the album's first single.

FIFTEEN also features two co-writes with Ron Sexsmith that reveal Colin's softer side: ?Finally Wrote a Song for You?, which is a soulful love ballad; while ?Shoulder to Cry On,? is an acoustic number that highlights his vocal range and closes the album. The disc also features some inspiring covers of John Lennon's "Jealous Guy", Peter Green of Fleetwood Mac's "Oh Well", Foy Vance's gospel-tinged ?Shed A Little Light,?and Allen Toussaint's funky "Sneakin' Sally Through The Alley".

Christmas (With The Little Big Band)

And The Little Big Band III