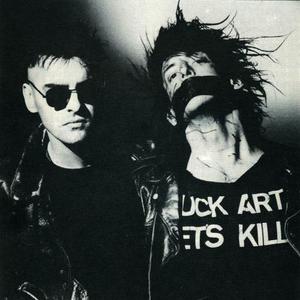 Chemlab is a coldwave and industrial rock (or "machine rock") band formed in Washington D.C. in 1989 by Dylan Thomas More and Jared Louche with the help of short-time member Joe Frank. Influenced by the pioneers of the industrial genre, such as Throbbing Gristle, Chemlab brought a rough, experimental approach to their music. Moving to New York City in 1990 and dubbing their drug-influenced sounds 'Angel-Dustrial', they built up a strong fanbase by touring with such artists as White Zombie, KMFDM, Nine Inch Nails, Gwar, 16Volt and Sister Machine Gun.

They released only two albums and two maxi-eps as the original duo. Their first album, "Burn Out at the Hydrogen Bar", recorded at famed Chicago Trax studio, is considered to be one of the top ten most influential cult Industrial records. Jared and Dylan recorded and toured with many seminally important musicians such William Tucker (Ministry, etc), Geno Lenardo (Filter etc), Charles Levi (My Life with the Thrill Kill Kult, etc) and Krayge Tyler (Crazytown, etc).

Chemlab broke up in 1997, and reformed in 2004 with Jared as the only original member. Working with the members of Acumen Nation, old touring guitarist Greg Lucas and Julian Beeston (Nitzer Ebb, etc), he recorded and released an album entitled "Oxidizer". Recently, after a massive seven year hiatus from the stage, Jared and a backing band comprised of the members of Electro-Industrial group Mindless Faith has taken Chemlab back on the road again. They have performed around the country at a number of festivals and are planning tours for 2007. The album "Rock Whore vs Dance Floor", a varied collection of remixes from "Oxidizer" by Die Warzau, 16Volt, Cubanate and many others, was released in late spring, 2006.

For more in-depth information go to: www.hydrogenbar.com as well as: www.myspace.com/chemlab

Bur nout at the Hydrogen Bar