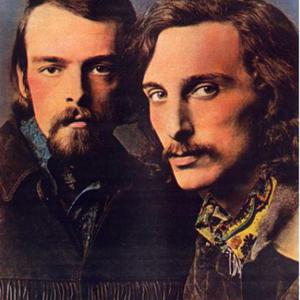 Brewer & Shipley were a folk rock duo of the late 1960s through 1970s, consisting of singer-songwriters Mike Brewer and Tom Shipley. They were known for their intricate guitar work, vocal harmonies and socially conscious lyrics, which reflected the concerns of their generation -- especially the Vietnam War, and the struggles for personal and political freedom. Their biggest hit was the song "One Toke Over The Line" from their 1970 album Tarkio. They also had two other singles which made the Billboard charts: "Tarkio Road" (1970) and "Shake Off The Demon" (1971).

They continue to perform, both separately and together, usually in the Midwest.

The two Midwestern natives crossed paths numerous times at various coffeehouse gigs before settling in Los Angeles to write music together, producing their first two albums Down In L.A. and Weeds. Even though mutual friends in bands such as The Association and Buffalo Springfield also lived in Los Angeles, they left California in 1969, returning to Kansas City, where they made a meager living through playing in college towns. They derived the name of their next album, Tarkio, from a regular gig they played in Tarkio, Missouri. This album was their most commercially successful, featuring the hit "One Toke Over the Line", which they wrote as a joke while preparing backstage for a performance.

Following airplay of the single, President Richard Nixon labeled Brewer & Shipley public miscreants. In retaliation, they referred to Nixon by name in their song, "Oh Mommy," (from Tarkio).

Oddly, the song was performed on The Lawrence Welk Show, a television program known for its conservative, family-oriented bent, by a duo known as "Gail and Dale." At the conclusion of the performance of the song, Welk remarked, without any hint of humor, "There you've heard a modern spiritual by Gail and Dale."

"The Vice President of the United States, Spiro Agnew, named us personally as a subversive to American youth, but at exactly the same time Lawrence Welk performed the crazy thing and introduced it as a gospel song. That shows how absurd it really is. Of course, we got more publicity than we could have paid for."

In 1989 they performed a one-off gig and a short time later began writing together again, producing two albums, Shanghai (1993) and Heartland (1997). They have continued to tour together, part time, since the '90s. At present, Michael Brewer lives outside of Branson, Missouri. Tom Shipley lives in Rolla, Missouri, where he is on the staff of Missouri University of Science & Technology (formerly the University of Missouri - Rolla). He is manager of distance learning, video, audio, and other special video productions for the university.

One Toke Over The Line: The Best Of Brewer & Shipley

The Best Of Brewer & Shipley

Shake Off The Demon (Vinyl)