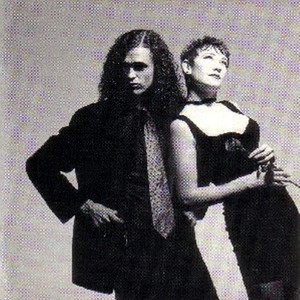 Bongwater was an art rock band from New York City, formed in 1985 and dissolved in 1992. The group was founded by Ann Magnuson and Kramer (who was also the founder of the now defunct Shimmy Disc record label). Magnuson caught Kramer's eye when he saw her perform in the all girl band Pulsallama. Bongwater also featured Shimmy alumni drummer Dave Licht and guitarists Dave Rick who went on to play with Shimmy Disc's anchor band King Missile for a short time and later helped Ann Magnuson in producing and playing guitar on her first solo album called The Luv Show in 1996.

Earlier recordings consisted of a few psychedelic-era cover songs. At the time of the release of their album Breaking No New Ground, Rolling Stone compared them to Jefferson Airplane mainly due to their cover of Moody Blues signature song Ride My See-Saw as well as their cover of the Carole King composed song - made famous by the MONKEES called The Porpoise Song. The ambitious duo also put their signature on Led Zeppelin songs like Dazed and Confused, sung in Mandarin and re-named Dazed and Chinese, as well as a more conventional cover of Zeppelin's Four Sticks. The band's style ultimately evolved into a more poppy, approach which according to Kramer, is why their album The Big Sell Out was named as such. The album still retained some of the band's earlier edge as well as retaining the surreal and wicked, often self-deprecating wit which had distinguished the group's earlier releases. Magnuson's performance art or spoken word "cut up's" (often taken from her dream journal excerpts) would become a integral part of Bongwater's sound. David Bowie was impressed by their humorous song David Bowie Wants Ideas and in a Rolling Stone interview jokingly called Magnuson "...a brilliant and very dangerous artist..."

They distinguished themselves as interpreters of songs by other artists, in particular of 1960s psychedelic rock songs, although they also covered occasional oddities like Bedazzled by Dudley Moore and Rock and Roll, Part II in which Ann Magnuson added a stream of consciousness performance art piece with hilarious lyrics making fun of Paul Newman's Own food products. They also covered Kisses Sweeter Than Wine by The Weavers which had also been covered and made popular by Johnny Cash . Bongwater also covered The 13th Floor Elevators You Don't Love Me Yet. Kisses Sweeter Than Wine was tributed to Magnuson's deceased brother, Bobby, and others lost to AIDS which she mentions in the song. Bongwater also covered the classic Buffalo Springfield/Neil Young penned song Mr. Soul on the early 90s tribute album to Neil Young called "The Bridge." They also put their unique stamp on The Beatles song Julia.

The group created a number of arty low budget home movie-style music videos, three being directed by Magnuson's then-boyfriend, Brad Dunning. The video for "The Power of Pussy" which was more slick and polished, was financed by and aired on the Playboy Channel.

Bongwater had two college radio hits, "The Power of Pussy" and the marathon-length "Folk Song". Artistic differences, ego and Magnuson's lawsuit over profits caused the group and the eventual destruction of the true "indie" Shimmy Disc record label "... to shatter into a million pieces..." as Kramer wrote in the liner notes in the "Box of Bongwater" collection and elsewhere.

The Big Sell-Out (Us Edition)

The Power Of Pussy