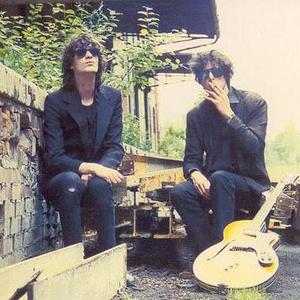 The 39 Clocks were an underground band from Hannover. Together with Nova Express, The Beauty Contest, Shiny Gnomes, Multicoloures Shades, Die Kastrierten Philosophen (the Castrated Philosophers) and Yellow Sunshine Underground they contributed to the German underground neo-psychedelic scene of the 1980s. In 1976, J?rgen ?J.G.39? Gleue (guitar, bass, vocals) and Christian ?C.H.39? Henjes (guitar, orgal, vocals), both from Hannover, played together under the name Killing Rats, and later Automats (trans: "Machines").

In 1976, J?rgen ?J.G.39? Gleue (guitar, bass, vocals) and Christian ?C.H.39? Henjes (guitar, orgal, vocals), both from Hannover, played together under the name Killing Rats, and later Automats (trans: "Machines"). The nucleus of the band was soon expanded with the addition of drummer Claudius Hempelmann (he later joined labelmates and new wave proponents Der Moderne Mann) and R?diger Klose, also known for his work with Die Kastrierten Philosophen. In the studio they were joined by, amongst others, S?sskind from Kosmonautentraum (Spaceman Dream) on the melodica, and Emilio Winschetti, singer with labelmates Mythen In T?ten, later in Mint and The Perc Meets The Hidden Gentleman, on synthesizer. In 1980, a 7" of 'DNS' was released through the independent record label, No Fun Records, as was their 1981 LP, 'Pain It Dark'. For their second record, Gleue and Henjes founded their own record label, Psychotic Promotion, through which Die Kastrierten Philosophen also released their first record. In 1983, the duo split and Henjes founded The Beauty Contest, who released records through the Hamburg label, What's So Funny.

Visually, the band were reminiscent of the Velvet Underground, and musically, they were influenced by the American garage rock of the 1960s with a psychedelic direction and its comparable simplistic production techniques, along with a bastardised use of the English language, somewhat similar to what we know today as "Denglisch" (the German equivalent of Franglais). They were always dressed in black, wearing sunglasses, and coined phrases such as "black and white TVs show better films than colour sets." Rather than melodic psychedelic rock, they called their music "psycho-beat". Many speak retrospectively of thegroup as "the German Velvet Underground" - a comparison that the duo always rejected. The Clocks never had an entry into the Hannover rock hall of fame, however they've not quite been forgotten. For example, in 1998 one of the Clocks' songs found its way onto the soundtrack of the film, "23 - Nichts ist so wie es scheint" ("23 - nothing is quite as it seems"). In addition, many remember them as the forerunners of the German psychedelic renaissance in the attempt to stylise Hannover to the coming pop and rock domination, through which the Clocks were lumped in with mainstream bands such as Scooter and Mousse T, a particularly strange mixture. (This bit makes little sense in English or German).