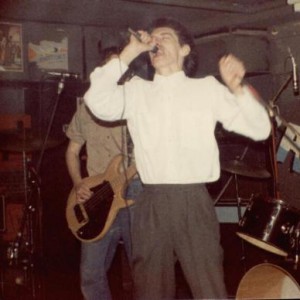 Tronics were a post-punk band from London, fronted by Ziro Baby (more recently known as Zarjaz). Between 1979 and 1984 Tronics released four singles, a cassette, an LP and a flexi-disc. A brief flirtation with the "mainstream" indie scene culminated with a single on the Creation label. The band started in 1977 as a fairly standard thrash/punk outfit called the Gits with Ziro - styling himself Ronnie Git - joined by Rick Gregorson (gtr), Glenn Evans (drms) and Phil Anderson (bs).

After debuting at Westfield College and playing a few club and pub gigs, Anderson was replaced by Rick Kenyer and the new lineup, now as Tronics, recorded a handful of unreleased demos, all of Baby's songs and then, at Gooseberry Studios in Soho, 'Suzy's Vibrator' and 'Favorite Girls', the coupling which became the first single. After Evans left to join the Reds, the original band released a second 45, 'Time Off' and then fell apart. Baby regrouped with new musicians and an ever-evolving, more complex style that incorporated more and more of the bizarre artistry of his side project, the Cathedrals. By the time Tronics recorded 'Shark Fucks' and the album, 'Love Backed By Force', in 1980, the band was down to a duo, Baby augmented by Gaby de Vivienne.