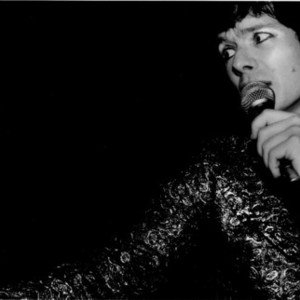 Bobby Conn is Love. Bobby Conn is all. Bobby Conn is peace, prosperity and a chicken in every pot. Bobby Conn will sing his way into your heart with his catchy songs about cocaine, the supremecy of the Jewish people and the upcoming apocalypse. ALL PRAISE BOBBY CONN!!! Bobby Conn is a musician from Chicago, known for his pop-rock. He often collaborates with other Midwestern artists like musicians Colby Starck and Jim O'Rourke, and film-maker Usama Alshaibi.

Bobby Conn is a musician from Chicago, known for his pop-rock. He often collaborates with other Midwestern artists like musicians Colby Starck and Jim O'Rourke, and film-maker Usama Alshaibi. Conn has released five studio albums to date: Bobby Conn (1997), Rise Up! (1998), The Golden Age (2001), The Homeland (2004) and King For A Day (2007), along with a live album Live Classics (2005) and an E.P. called Llovessonngs (1999). He currently lives in Humboldt Park, Chicago with his wife (violinist Monica BouBou) and two children. He has also once turned his hand to producing, helming a 2003 session for UK punk band The Cribs, which would make up part of their debut release, after he first encountered them as a local support band on a UK tour sometime in 2002.

Conn's real name is Jeffrey Stafford. He was born in New York on June 13, 1967, but spent much of his young life in the Chicago suburb of St. Charles, Illinois. Jeff's original band in high school was a hardcore punk trio called "The Broken Kockamamies" (The BK's, or BKS) noted for using 8 foot strobe lights on a darkened stage as their only prop. The strobes were affectionately called "the pillars of fear."

Conn was first noticed playing guitar in the Chicago prog rock trio Conducent in 1989; by 1994 the group called it quits and Conn went solo. His first lineup consisted of ex-Conducent member DJ Le Deuce on turntables, as well as his future wife Monica Bou Bou on electric violin.

Bobby Conn and the press

Bobby Conn is known for his elaborate (and untrue) press releases, and for lying in press interviews. Over the years he has claimed to be the Antichrist, to have cut off his ring finger, to have served time in a federal facility in Maryland, and to have invented "The Continuous Cash Flow System" in order to bring down America by creating a huge national debt.

A typical Bobby Conn press release reads like this:
? "He developed the "Continuous Ca$h Flow System" while incarcerated in a federal facility in Maryland, serving out a sentence for mail fraud. In his solitude he was struck by two things: firstly, that his illegal difficulties were due to his focus on earning rather than spending as much money as possible, and more importantly, that he was likely to be the Anti-Christ. Bobby now knew that time was short, the coming Armageddon would destroy humanity at century's end, so he had to reach people quickly. A natural performer and gifted musician in the popular tradition, he structured his "Continuous Ca$h Flow System"[...]Bobby knows that creating a financial vacuum inside oneself is the best way to fill a spiritual void, and he demonstrates this regularly by distributing thousands of dollars in the form of $20 bills to every audience member. But with his gift comes a desire. A desire to spend. And spend. And spend yet more, creating a glorious Debt that promises, if not salvation, a thrilling high-paced life-style. And when the collective Debt of our generation grows large enough, the entire Pig System of Oppression will be snuffed out like a candle in a hurricane."

In more recent years Conn has been more candid in interviews, and has admitted that all of these early fabrications for the press were merely a charade. When asked in an interview why he lied to the press so much Conn answered "I always thought it was part of the creative process. Creativity is lying. My own story doesn't seem very interesting to me...You don't want to be who you are onstage everyday. What's the point in that? "[3] Conn also said in another interview that the source of his onstage persona was "egomaniacal delusions that I've had since I was a kid - I tried to hyperbolize them to see how far it would go. To me when I came up with the whole idea of trying to promote myself as a potential Antichrist I figured that no-one is going to take this seriously or even acknowledge it because it's about the dumbest thing you could say."

While Conn would usually be considered more avant garde than a protest singer, he said of his art that "All the records that I've done are a critique of what's going on in contemporary America" [1], and he is an outspoken critic of the Bush administration. However, Conn has admitted that while he actively protests what he sees as the evils of American society, he is not always at ease with such a label for himself. "I've always done lots of social commentary that I believe in pretty strongly but I am very uncomfortable with the role of the artist as a meaningful social critic...my whole generation [is] a confused group of people with an ambivalent way of dealing with protest." [2] . Discussing his most recent album "King For a Day", Conn said "it's political, but just in a contemporary culture kind of way[...] Two of the songs are about Tom Cruise, and I don't know if there's a more political statement than Tom Cruise. He kind of symbolizes a lot of what's going on in this country right now and how people are responding to it." [3]

Bobb Conn on being a 'protest singer':
? It's great when Curtis Mayfield does it, but when Mick Jagger writes about being a street-fighting man, it just kind of makes you sick. Or the Beatles singing about revolution. They're entertainers?it's a pose, it's bullshit. I'm more of a vaudevillian than I am a political commentator. I don't think people should turn to music for their serious information. People should read the newspaper.[4]

King For A Day