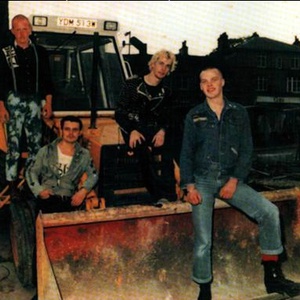 There is more than one artist with this name: 1) Blitz, British punk band Blitz were a British punk band who had enjoyed success in the indie charts in the early 1980's. They were often lumped in with oi bands such as Cockney Rejects; however, with the release of the "New Age" single and their second album Second Empire Justice, Blitz shifted from their punk roots to a much more new wave and post punk-electro sound. They came from New Mills in Derbyshire and were enthusiastically championed by music journalist Garry Bushell.

Blitz were a British punk band who had enjoyed success in the indie charts in the early 1980's. They were often lumped in with oi bands such as Cockney Rejects; however, with the release of the "New Age" single and their second album Second Empire Justice, Blitz shifted from their punk roots to a much more new wave and post punk-electro sound. They came from New Mills in Derbyshire and were enthusiastically championed by music journalist Garry Bushell.

Blitz was the first Brazilian rock band to achieve mainstream success and to have hit singles (Voc? n?o soube me amar, A dois passos do para?so, Ana Maria (biqu?ni de bolinha amarelinha t?o pequenininho)) kick-starting the movement the 1980s boom that would later be called "BRock"[1].

In 1982, the first compact, "Voc? N?o Soube Me Amar", achieved a huge success, followed by the album "As Aventuras da Blitz". Due to its success among children, they even publish a comic book.

Still in 1982 they recorded their first album "Voc? n?o soube me amar", an immediate success with fourteen songs and a comics-like design. The logo resembles that of X-Men comics.

They split in 1986 but some of the original members got back together ten years later. Since then they are making sporadic shows in Brazil.

They recorded 9 albums, one dvd and their history is told in the book "As Aventuras da Blitz" by Rodrigo Rodrigues. There is talk that their tenth album will be released in 2009.

It's going to take more than verbal missiles for Hip-Hop to stay in power. Now more than ever, we need diplomats to forge lasting creative alliances, finesse fence-sitters and bridge the gap between warring factions.

Blitz the Ambassador has been ready for that job. And Stereotype, the underground king's politically-charged, genre-bending third album, proves it.

?I went for broke with this album,? says the Ghana-born MC and producer who counts Fela Kuti, Bjork, Miles Davis, Nina Simone and Rakim among his influences. ?I set out to change the way hip-hop approaches live instrumentation, to create synergy between all of the sounds on my personal playlist.?

Lest the hip-hop get lost in the musical mash-up, there's Blitz's bombastic flow and stadium-size stage presence. In the tradition of KRS-One and Chuck D, Blitz can move any crowd, small or large. He's hijacked the hearts of Soulja Boy-loving teenyboppers in tiny Clemson, South Carolina. He's swayed a grown and flossy Philly crowd who paid their money to watch Freeway and Akon but couldn't help but shake their asses to Blitz's cascade of sound.

Growing up in Accra City where electricity and running water weren't promised, Blitz found solace in creativity, drawing award-winning pictures, playing the djembe drum, and soaking up the urgent horns and multi-layered percussion of the local High Life music. In the early ?90s when his older brother brought home Public Enemy's ?It Takes a Nation of Millions to Hold Us Back', Blitz found his calling.

?These guys felt the way I felt and they could speak honestly about it,? the Brooklyn transplant explains. ?At that time, Ghana was just recovering form a brutal military government? try to make a political statement and you'd be gone. Hip-hop allowed me to hear people who looked like me speaking out.?

By blending the slang of his community with the cadences of American rappers, Blitz went on to win local MC battles, make radio appearances, and play venues and festivals from Arusha Tanzania, to Berlin, Germany. Even as a marketing major at Ohio's Kent State University, he stayed focused on hip-hop, co-producing, distributing and directing videos for his first two efforts, ?Soul Rebel' and Double Consciousness. And of course he opened for any artist who came to town, including Talib Kweli, The Roots and De La Soul.

Now, more than a decade into the hip-hop game, Blitz still brings the undiluted passion of a new artist. Even the provocative cover of Stereotype?a man with a boom-box for a head blows out his brains?symbolizes of his love for the culture. ?Hip-hop music is our lifeline,? the MC says of the image he designed as a response to the fuselage of ringtone-y singles and studio gangersterism on the market. ?We can't buy into stereotypes of young Black men and stay involved in our music's destruction and think we're going to survive ourselves.?

With Stereotype, we can all rest assured that Blitz the Ambassador is doing his part to help repair what's wrong in Hip-Hop?and to celebrate what's so very right.

BLITZ was born in the year '72 as a twin brother of Disco. He rose to prominence in late last century when pair of french lovers witnessed the healing power of his eyes. It's said that once you see deep into his irises you'll be hit by the full clarity of your life's purpose. Simultaneously you're freed from any of your drug addictions. Once he looked into the mirror far too long and his own destiny was revealed ? mirror shattered and he made the first disco ball out of the debris.

Blitz absolutely adores pigs and aggressively refuses to eat any of their meat. Owns two of them.
Groove is in his heart. Blitz to the max!

Welcome To The Rock Show (CDS)

The Albums - Voice Of A Generation CD1

The Albums - The Killing Dream CD5

All Out Blitz: The Very Best of Blitz

The Best of Blitz