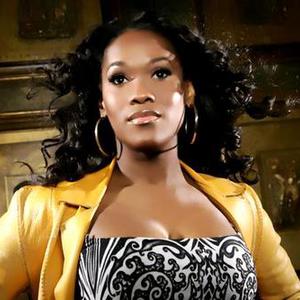 The former member of Adoration 'N Prayze and noted solist with Voices of Unity has stepped out solo at a time when the field is both fertile and competitive. A tremendously versatile project, Damita's tracks are anything but typical. This project impacts in that it draws from some non-traditional gospel influences, and uses the ambiguity to a successful end. Too soulful to be classified as CCM, and atypical of even contemporary gospel, Damita sets out to claim new musical territory.

A tremendously versatile project, Damita's tracks are anything but typical. This project impacts in that it draws from some non-traditional gospel influences, and uses the ambiguity to a successful end. Too soulful to be classified as CCM, and atypical of even contemporary gospel, Damita sets out to claim new musical territory.

Atlantic Records holds back no cards in recruiting a stable of chart-busting producers. Contributing are the likes of Arif Mardin (who boasts a list of adult contemporary elite that includes Phil Collins, Barbara Streisand and Bette Midler), and Jim Ed Norman (whose happy clients include The Eagles, Faith Hill and Take 6). Damita's husband, Deitrick Haddon lends a hand on a few tunes as well.

There are a burst of different flavas on this project that give it a twist. The guitar infused "Truth" features Toby McKeehan of dcTalk and grips you early on the rock tip. "Calvary" is a versatile ballad that could grace the CCM airways as easily as be heard on your Sunday morning gospel segment. Vocally, it is notable in that it is easily duplicated -a quality that arguably led to the success of songs like Kirk's "Why We Sing". Penned by Gerald and Tammy Bell Haddon, the ballad backed primarily by keys and strings is beautifully fragile, and Damita expresses a classic suitable vocal.

Back to the rock vibe. At first listen you may not think "Hold On To Your Faith" is your cup of tea, but even so, if you do nothing but appreciate the lick-laden mix, you WILL have to concede to the overall masterwork! However, if you free your mind, you just might find it's more than that. Damita gives you Tina Turner energy on the vocal side and the uplifting lyrics are absolutely infectious. When you find out it's your favorite, don't be surprised. We'll keep your secret.

Damita"Won't Be Afraid", addresses the social issue of abuse, and how God can deliver. The production team of Deitrick Haddon and Kevin Hicks and Bryan Michael-Cox package the mid-tempo tune aptly.

"The Wedding Song", was picked up to be featured on Bride Magazine's promotional campaign. A slow tune penned by Deitrick, who is featured in duet, speaks of matrimony from both a Godly and romantic point of view. The magazine reportedly has well over 5 million readers, and it will be interesting to see how the song's inclusion in marketing efforts will impact album sales. Originally written for Damita and Deitrick's own wedding ceremony, it shows another side of her vocal ability.

"If Ever", another strong ballad, brings definite pop overtones. Reminiscent of some old Abba tunes in structure, complete with electric guitar solo and pulsing background vocals, this addresses love from it's very real human view. Sharing unrestrained emotion Damita's voice is wonderfully raspy and bright all at the same time.

Exceptional production and a can't-be-forgotten voice couple for a trailblazing debut for Damita Haddon. In this climate hot for crossover, the most interesting thing will be to see where many of the vast array of cuts will land.

If you are unconcerned with all of that and are just looking for a fresh take on the music we all love, you'll find a healthy dose here ? with a little bit of spice!