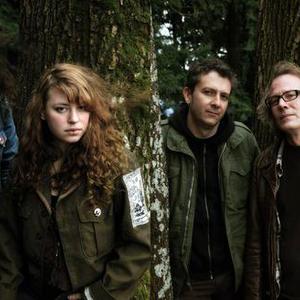 Witch Mountain is a stoner / doom metal band that was formed in Portland, OR in 1997 by Rob Wrong (Iommi Stubbs, ex-M99) and Nate "Nanotear" Carson (Point Line Plane, Two Ton Boa, Sunn O))) collaborator, etc). By 2000, the groundwork had been laid, the demo "Homegrown Doom" was remastered and released in Europe, and Dave Hoopaugh (Iommi Stubbs, Comavoid, Towers) was brought in to be the final bass player after a string of many.

Debut album "...Come the Mountain" was released to critical acclaim in 2001. Man's Ruin tried to license it stateside, but they went under before it could happen. The first printing sold out in 2 months, and an expanded edition was released with bonus tracks composed for the unreleased PC/Dreamcast video game "Shrapnel".

Witch Mountain's last tour was in 2002 with Eternal Elysium from Japan. After that, a period of hibernation was in effect. Rob and Dave had children to raise and families to look after. Nate was touring constantly with PLP.

In 2005, WM shook the dust off for an appearance with the mighty Yob (their last Portland gig ever) and Totimoshi. Seasonal gigs followed with Acid King, Atomic Bitchwax, Wolves In The Throneroom, and others. It became clear that the chemistry was better than ever, and the songs had really bloomed over time.

2006-2007 marked the return of Witch Mountain to Portland stages as a trio with new songs and veteran tone and ability. Gigs with Danava, Gargantula, Green Milk From The Planet Orange, Stovokor, Buried Blood, and old friends The Glasspack made for good times and further deafened the local audience.

2008 will be an auspicious one for WM as the sophomore album "South of Salem" will finally be recorded and released. We also are happy to say that two WM songs are used in soundtrack of the hilarious feature comedy "Film Geek". Keep an eye on this Myspace page for upcoming shows, and recording news.

Cauldron Of The Wild