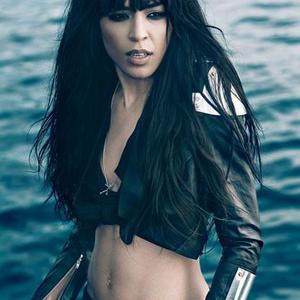 Loreen (born Lorine Zineb Nora Talhaoui on October 16, 1983 in V?ster?s, Sweden) is a Swedish singer and music producer of Moroccan-Berber descent, who rose to international fame after winning the Eurovision Song Contest 2012 in Baku, Azerbaijan, with chart topping "Euphoria". Euphoria reached number one in 18 countries after the victory. Interested in becoming a musician, she took part in the Idol 2004 television competition, coming fourth overall.

Interested in becoming a musician, she took part in the Idol 2004 television competition, coming fourth overall. The following year she released her first single, "The Snake" together with Rob 'n' Raz. She has also been working behind the camera in Swedish TV-shows such as "Matakuten" and "Familjen annorlunda" during her hiatus from music scene.

In 2010, Loreen was signed to a brand new record label "Mohito Music" (a sublabel of Warner Music Sweden) established by famous Swedish singer M&aring;ns Zelmerl&ouml;w. By the end of 2010, it was announced that Loreen will be participating in Melodifestivalen 2011, the Swedish selection for Eurovision Song Contest 2011, with her entry "My Heart Is Refusing Me". The song was voted to the 2nd selection (Swedish: Andra chansen), but unfortunately, she did not make it to the final.

Loreen participated again in the following year, and won the Melodifestivalen 2012 with the song ?Euphoria?. She represented Sweden in the Eurovision Song Contest 2012 in Baku, Azerbaijan.
The song won the Eurovision Song Contest 2012 with a total of 372 points. 114 points came from the International jury, and 32,7% which is 154 points, came from the televoters, and was thereby the No.1 selection by both the jury and the televoters.
The song is written by Thomas G:son and Peter Bostr?m, which are two well-known Swedish songwriters in Melodifestivalen. According to the Euphoria Songfacts, Bostr?m had a mixed evening at Eurovision. He not only contributed to the winning entry, but he also co-wrote the Norwegian entry "Stay ", which placed last with only 7 points.

After her victory in Eurovision Song Contest 2012, Loreen will do a small summer tour in Sweden, playing her winning song "Euphoria" along with her previous released tracks and cover songs.

During summer 2012, Loreen will also work in the studio on finishing her studio album that are scheduled to be released on September 5, 2012. According to interviews, the songs will be written by Loreen herself together with another composer. She has revealed that Swedish artist Kleerup will be featuring the album.