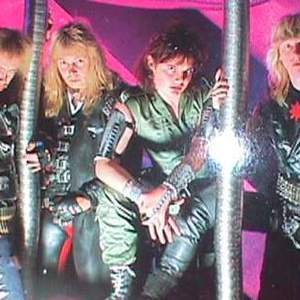 The roots of Atomkraft date back to the summer of 1979, when Tony ?Demolition' Dolan and Paul Spillett got together with the intention to form a band. Initially, going under the name of Moral Fibre and playing Punk Rock, they recruited guitarists Ian Legg and Chris Taylor. Ian Legg then left to be replaced by Ian Drew who also subsequently left. However the band continued to operate as a trio. Atomkraft

Atomkraft
On returning from a trip to Bremen, Germany, Chris presented his band mates with some button badges featuring the environmental slogan ?Atomkraft, Nein Danke!' (Nuclear Power, No Thanks!) They liked the way the word Atomkraft sounds and so adopted it as the band name, believing it suits the new ?metal' sound they pursued. In the endeavour for something more metal and less punk they got rid of Chris.

After trying out a couple of guitarists they settled on Steve White, whom Tony knew from his art class at college. Another member of Tony's art class, Mark Irvine, joined on bass. With Tony on rhythm guitar and vocals and Paul on drums the new line-up played four shows. Unfortunately, Mark's parents disapproved of his heavy metal image and lifestyle and so persuaded him to quit the band. Tony switched back to bass and the band was able to continue.


Demon
In 1981 the band recorded the four song demo ?Demon' at Impulse studios, this being funded by band member Paul Spillett who was the only one working at the time and with the help of Keith Nicol. It was their first ?proper' demo, although, the limitation of time and a 2-track recorder gave results that were pretty bad. However, the band soldiered on, gaining experience by continuing to play live shows.


Total Metal
In the early part of 1983 Atomkraft returned to Impulse studios to record another demo. Learning from their previous experience they opted to record only 2 tracks for the ?Total Metal' demo, featuring the title track and ?Death Valley'. Steve passed a copy of the demo to Sam Kress, who ran a radio station and ?Whiplash' magazine. Sam liked the demo and promised to feature the band in his magazine. However, in late 1983, Steve left the band for personal reasons. Tony was left wondering what to do. By coincidence he was invited to stay with his sister in Canada to help out with her two kids, while she was studying. With Tony unemployed and the band effectively on hold, he decided to take her up on her offer.


Canada
In 1984 Paul Spillett joined Tony in Canada. Tony was further inspired when he got a copy of the magazine containing the write-up that Sam Kress promised. The write-up presented Atomkraft in a very positive light and also featured Venom, Raven, Metallica, Anthrax and Megadeth. Spurred on by this, Paul and Tony began writing material and returned to England in late 1984 to search for a guitarist. They later fell out over a girl and went their separate ways.


Pour The Metal In
While visiting Neat Records to see if anyone could recommend a drummer, Tony met Cronos of Venom who informed him that Ged Wolf (the brother of Venom's manager) was looking for a band having just left Tysondog. Tony and Ged got together and started auditioning for a guitarist, but initially didn't have a lot of luck. Then a 16-year-old guitar player, Rob Mathew, was recommended as being a great guitar player and so they all met up. Fortunately they got on well and this became the new Atomkraft line-up. The band began working on the new material that Tony had been writing, and went on to record the ?Pour The Metal In' demo at Neat Records studio. It featured 3 tracks, ?Pour The Metal In', ?Burn In Hell' and ?Carousel'. The demo is sent to various fanzines and received a good response. Dave Woods of Neat Records also hears the demo and offered them a deal, and so the band started work on the ?Future Warriors' album.


Future Warriors
Recorded over a couple of weeks and produced by Keith Nichol, ?Future Warriors' was released in September 1985. Despite getting a particularly poor review in Kerrang magazine, other reviews were more positive and they got further requests for interviews. The band also opened for Slayer at the Marquee, where faulty equipment resulted in the band trashing the equipment in frustration after just three numbers. Despite this the band were asked to join the bill of the Venom/Exodus tour.


Queen Of Death
After the end of the Venom/Exodus tour Atomkraft prepared and recorded a new EP, with the tracks ?Your Mentor' on the A-side and ?Demolition', ?Funeral Pyre' and ?Mode III' on the B-side. Unfortunately, the EP didn't get released in this form, as a rift developed in the band as a result of discussions over management.

Tony wanted to use the services of a London-based company, while Ged and Rob wanted to use Venom's management. The disagreement couldn't be resolved and so Tony left the band.

Neat then released the track ?Your Mentor' as part of the Powertrax promotional cassette, while the vocal tracks on the rest of the ?Your Mentor' sessions were re-recorded by Ian Davison-Swift from Avenger. D.C. Rage (Darren Cook of Avenger) was brought in as bassist and two new tracks were recorded, with the new four-piece, ?Queen Of Death' and ?Protector' (although Alan Hunter of Tysondog had originally contributed vocals to ?Protector'). In October 1986 the re-titled ?Queen Of Death' EP was released with the title track and ?Protector' on the A-side, and ?Demolition', ?Funeral Pyre' and ?Mode III' on the B-side. The pictures on the back cover show the line-up of Ged, Rob, Ian and D.C. Rage although this line-up never played live. A re-recording of the track ?Future Warriors', with Ian on vocals was also licensed for future inclusion in a compilation. However, it wasn't long before Tony was invited back in the band to replace D.C. Rage on bass, while retaining Ian on vocals.


Conductors Of Noize
The new line-up records the mini-album ?Conductors of Noize', which was released in July 1987, and then promoted the record as part of support to Agent Steel and Nuclear Assault. The first date of the tour, at Hammersmith Odeon featured an expanded line-up of Max Penalty, Atomkraft, Onslaught, Nuclear Assault and Agent Steel, and was promoted as ?The Longest Day'. Atomkraft's performance was filmed for the ?Live Conductors' video as well as being recorded for a live BBC radio broadcast. They also played Dynamo Festival alongside Testament, Destruction and Stryper with the show going out live on Dutch radio. With the tour at an end and the band preparing demos for the next album (to be titled ?Atomized'), a thicker guitar sound was required, so simply re-recruiting D.C. Rage and Tony switching to guitar resolved this.


Poland
The expanded 5-piece embarked on a 1988 European tour with Nasty Savage and Exhumer ultimately resulting in a ?unique' gig (for the time) in Katowice, Poland at Spodek Stadium. This show was recorded for live TV/video. On completion of the tour Ian left the band as did Tony (who was offered a position in Venom as replacement for Cronos), and despite Ged's attempts to recruit replacements the band folded in 1988.


Reformation
In 2004 Sanctuary Records (who have previously acquired the Neat Records back-catalogue) released an Atomkraft anthology. With renewed interest in the band, Tony reformed Atomkraft for live dates and a new album. The new line-up includes Payre Hulkoff on guitar and Steve Mason on drums.