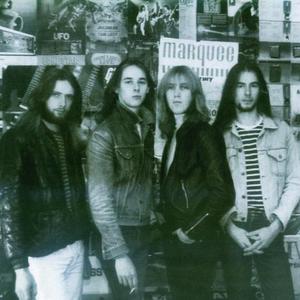 There are multiple bands with the name Trespass: 1) The Sudbury, UK based band associated with the "new wave of british heavy metal" movement formed in 1978, and are perhaps most famous for their contributions to 1980's 'Metal for Muthas Volume II: Cut Loud' compilation, "One Of These Days" and "Storm Child." They released three singles during their original run: 'One of These Days' and 'Live It Up/Jealousy' in 1980, and 'Bright Lights EP' in 1981, in addition to appearances on the aforementioned 'Metal for Muthas Volume II' and 'Metal Explosion' compilations.

They recorded some demos before splitting up. In 1992, a compilation of single tracks and unreleased demos, called 'The Works' was released, and was followed a year later by a new studio album, 'Head'. In 2000 a second 'The Works' compilation was released, and Sanctuary released a two disc, 36 track anthology in 2004 named 'One of These Days: The Trespass Anthology' after the group's most famous song, which is now considered a bona fide, essential classic of the NWOBHM era.

2) TRESPASS is a three piece band from Israel, and no GENESIS clone in case you wondered. TRESPASS's music has lots of variation and a musical playfulness seldom heard in the progressive rock genre. This band performs their energetic brand of prog/baroque/jazz/blue/folk and bring us all back to life. Their sound reveals astounding Progressive rock pieces, English sung but with instrumental sequences dominating. You may think of EMERSON, LAKE & PALMER, FOCUS, UK or THE NICE.

Footprints in the Rock

One Of These Days - Anthology CD2

One Of These Days - Anthology CD1

In Haze Of Time