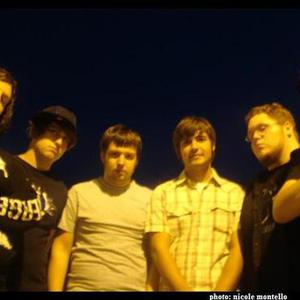 Blowing amps out of Poughkeepsie, New York, Bless the Fallen is a 6 member metal entourage riding the high metallic wave that in recent years has swept the nation. With only a year and a half of being a cohesive unit Bless the Fallen has not been sitting back hoping for fans and labels to come to them. No, they have been forging ahead with a savage determination to do what all bands originally form to do..

ake a living creating music, performing flawlessly under sleep depraved conditions and sharing fun-filled moments with the fans. Well in most people..s eyes it is much more glorious than that, but that is the reality of the underground music scene, and to Bless the Fallen it couldn..t be any sweeter. Playing with numerous national tours passing through the area as well as all day festivals that metal heads froth from the mouth over, Bless the Fallen is a group of wily show hardened veterans. Not only are these metal playing, stage rockers devout show hounds, but they also took on the task of recording and producing their debut E.P., "So Dark the Crown of Man". If it is any indication of things to come then any fan of metal and hardcore can found be sitting in front of their speakers covered in goose bumps. ..So Dark the Crown of Man.. is merely the start as it is overflowing with tranquil and epic guitar solos, rocketed out by a trio of handy guitarists paralleled by drumming that is as dead on as a sniper..s bullet.

The Eclectic Sounds Of A City Painted Black And White