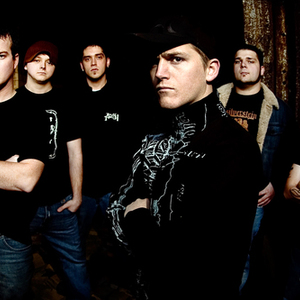 Cincinnati has never been considered to be one of the more high-profile music scenes a la New York, Los Angeles, Seattle or Austin, yet the new Victory Records band Beneath The Sky has emerged from that scene there with the resonance of the fabled Big Red Machine. The extreme death metal core outfit is shocking the world with What Demons Do To Saints, featuring a hellacious collection of songs that elicit fevered comparisons to bands such as Carcass, Hypocrisy, Shadows Fall and Killswitch Engage.

Rising from the ashes of various local bands, including scene favorite Blind Judgment, singer Joey Nelson, axemen Jeff Nelson and Chris Profitt, keyboardist Matt Jones, bassist Nick Scarberry and drummer Brandon Sowder came together in mid-2004. ?We knew each other when we were in different bands,? Nelson recalls. ?Over time, we first became friends, and eventually we decided to create our own band. It was similar to the music we were playing early on, only that we wanted to be a little more melodic with this band.?

It didn't take long for the sextet to realize their immense potential. ?From the start, we wanted to create a different sound,? Jeff says. ?We knew we had it right after the first show. Everything just clicked.?

Did it ever: In January of 2004, they cut a four-song demo in Cincinnati; 5,000 copies of it were snapped up almost instantly. After more touring of the Midwest, they recorded five new songs in Cleveland for another EP; copies of that went just as fast. The commotion attracted the attention of Victory Records, which brought them into the fold in no time?and back into the studio to record their debut album.

?We used four old songs, and the rest of them are new,? Jeff notes. ?One of the older songs we recorded completely shocked us when we heard the final version. We couldn't believe it was the second song we ever wrote. It's called ?Falling in Love With Cold Hands.' In all, we just wanted to make the best possible album we could make, and I think we accomplished that goal.?

Once the album hits retail on January 23, Beneath The Sky goes into overdrive on the road. ?It's all bigger and better from here,? Jeff concludes. ?We'll get out there, play hard and get on bigger tours. One thing will lead to another. For Beneath The Sky, even the sky isn't the limit.


On August 15th,2008: Beneath The Sky Posted A Blog On Their Myspace Stating Their Breakup

"We are here to inform you that BENEATH THE SKY have decided to throw in the towel, and go their separate ways. We are truly saddened that such a wonderful opportunity has briefly come to its demise. We would like to extend our deepest gratitude & love to all of our families, friends, and fans all over the world that have supported us from day one. You are the world to us!!
Thanks to those who have helped us out with booking/promoting shows, picked up our albums, gave us a place to sleep, or just helped us out in general. We want to give out our love & best wishes to all of those, and to the bands we had the pleasure of sharing the road/stage with. You all know who you are. Thanks for sharing the good times with us!!
Thank you & farewell"

Beneath the Sky has recently decided to get back together, due, to the endless support of our fans demanding so. We can only accomplish this by a show of true support by our fans from all over the world. We will be setting up a PAYPAL account, which, will allow our fans to send a donation & with your kind generosity we will be able to get the show back on the road.
We are looking so forward to seeing you all again. The love you have shared with us is truly rewarding. You are the main reason we are wanting to do this. We are doing everything in our power to possibly making this happen. Keep checking in with us for further updates & upcoming shows. Be sure to spread the word to everyone you know that we are back!!
Thank you for everything : )
-BTS Boys"

The Day The Music Died

What Demons Do To Saints

More Than You Can Handle