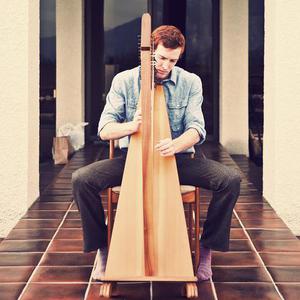 Active Child is the project of Pat Grossi, resident of Los Angeles, native of New Jersey. Inspired by his days as a choir boy and epic nights as a member of the band Weight Room, Grossi combines his soaring vocals and crunching analogue synths with the honey drip drop of echoing harps. For Pat Grossi of Active Child, the last two years have been nothing short of enriching. Musically, Pat has worked within and appropriated a number of styles into his sound...

For Pat Grossi of Active Child, the last two years have been nothing short of enriching. Musically, Pat has worked within and appropriated a number of styles into his sound, from his early days singing with that heavenly voice as a choir boy to his more recent forays into laptop-assisted indie-pop made in his bedroom, best exemplified on 2010's acclaimed Curtis Lane EP. His sound is so wide-ranging that he has found himself touring with many notable acts of differing genres, including dubstep producer James Blake, dreamy synth-pop of School of Seven Bells, and the indie-rock bands White Lies and White Rabbits.

Nothing quite prepares you for the leap that Pat has taken with his debut album, You Are All I See, out on August 23rd via Vagrant records. Recently, he has expanded his sonic ambitions and turned the studio into an instrument for a record that sounds cosmically huge and yet intimate all the same.

Of the album title, Pat himself says, ?You Are All I See is an attempt to build a bridge between the listener and I, in that, I wrote these songs for you as much as I did for me. And right now when you are listening to my voice, by yourself, it really is just you and I.? In attempting to craft songs that meant something not only to himself but that could be meaningful to others as well, he found himself working with some universally human and fragile themes. ?The songs focus primarily on the joy and heartbreak of relationships, love lost and rediscovered, battles with monogamy, battles with identity,? Pat says. ?It came out much darker than I had intended, but sometimes you only have so much control.?

The grand, cinematic scope of Pat's artistic vision is apparent on You Are All I See, which owes as much to his wide array of influences as it does to Pat's own knack for employing these influences in fresh, forward-thinking ways. With triumphant synths and shimmering, contrapuntal harp lines, songs like the title track and ?Hanging On? are reminiscent of Radiohead's ?Motion Picture Soundtrack,? but improve upon that template with layered vocals not far removed from Bon Iver or even James Blake, who Active Child recently opened for on tour. ?High Priestess? and ?See Thru Eyes? are stunning forays into electronic music territory, littered with samples, drum machines, and keyboards that propel the songs forward while simultaneously seeming weightless and suspended. It is in this tension that You Are All I See lives, breathes, and thrives so magnificently. The album is indebted to the sounds of the 1980s, from New Order's drums-and-synths to danceable hip-hop beats, and it's all topped off with soaring r&b melodies. The album's first single, ?Playing House,? features guest vocals from Tom Krell, the crooner of lo-fi r&b project How To Dress Well. Pitchfork Media recently premiered the track, noting ?Active Child's sound now seems positively ahead of its time.?

Reflecting on the album's finished product, Pat says ?I think more than anything, I see this debut release as a bridge towards something bigger and truer. Something I can look back on and think, ?damn, you really did it'.? When you finally hear You Are All I See you'll think the very same thing.

You Are All I See (Deluxe Edition)

You Are All I See

She Was A Vision (CDS)