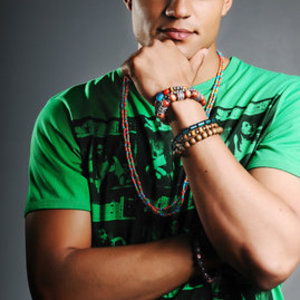 Mohombi Nzasi Moupondo (born 28 August 1986 in Kinshasa, Democratic Republic of the Congo), known professionally as Mohombi, is a Swedish-Congolese R&B singer-songwriter and dancer. Mohombi is RedOne's first signing to 2101 Records in joint venture with Universal Music Group. From 2004 to 2008 Mohombi was part of the Swedish hip hop group Avalon with his brother Djo Moupondo. Mohombi released his debut solo single "Bumpy Ride" in August 2010. The single became a top-ten hit in many European countries, and was followed his debut studio album, MoveMeant in February 2011.

Mohombi was born to a Swedish mother and Congolese father. Raised as a child in the Congo, Mohombi and his family escaped the war-torn country for Stockholm, Sweden in 1999 when Mohombi was 12. His parents regularly exposed him to varied musical influences from early on in his childhood so that Mohombi soon developed his passion for song. Mohombi studied at Rytmus Music High School in Stockholm and made his stage debut at seventeen in the Swedish revival production of the cult show Wild Side Story. He pursued his studies and obtained his bachelor's degree in music and song from Stockholm's Music Conservatory. He speaks Swedish, French, English and Lingala.

In Stockholm Mohombi and his brother Djo Moupondo, a local club DJ known as DJ Djo formed the group Avalon combining the dancehall and hip hop of the time with the distinctive African beats on which they were raised. From 2004 to 2008 the group sold over half a million records and won the All African Kora Awards, an African equivalent of the Grammy for the category Best Group - Diaspora Europe/Caribbean category, while Mohombi became a prolific songwriter in his own right. At this point music was only a part-time job, and looking for something more Mohombi headed to L.A. for a solo career.

Mohombi collaborated with Swedish rapper Lazee on "Do It", which was released in Sweden on 31 May 2010. It debuted at number nine on the Swedish Singles Chart. In Los Angeles Mohombi was introduced through friends to producer RedOne, whose own background is Swedish-Morrocan. The singer's debut single, "Bumpy Ride" is the first release on RedOne's label 2101 Records, a joint venture with Universal. It was released in the United States on 24 August 2010. Mohombi released "Miss Me" as his debut single in the United Kingdom on 31 October 2010. It features American rapper Nelly. His third single called "Dirty Situation" was released in Europe on 11 November and features R&B singer Akon. "Dirty Situation" is played at the beginning and then again later on in the middle of the music video for "Miss Me". Mohombi's debut album, MoveMeant was released in Europe Monday 28th February 2011 and is scheduled to be released in the US by the end of 2011.