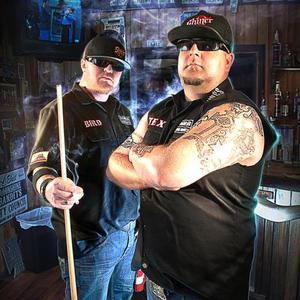 The Moonshine Bandits first met at High School in the little agricultural town of Los Banos. Los Banos is a small town located in Central Valley California. Growing up in a small town meant that there wasnt many things to do to stay out of trouble. Keg parties on canal banks or in the country hills, house parties, beer bongs, hay stacks, corn fields, big trucks, mud boggin', and lots of women, just about sums up the life of a Moonshine Bandit. In 1999, Moonshine Bandits formed.

The Bandits quickly gained local support and became the first rap/rock act from Los Banos to ever get signed to a National Distribution deal. The Bandits later caught the attention of MTV who licensed songs from the Moonshinerz for upcoming episodes of MTVs TV Series Undressed. The Bandits have built an impressive resume of music industry credits. With a career built on numerous National Album appearances, tons of side projects, mixtapes, and shows with established artists such as Uncle Kracker, Bubba Sparxxx, Tech N9ne, Kottonmouth Kings, Rehab, and E-40, the MOONSHINE BANDITS have definately made their presence felt.

Rebels On The Run (EP)