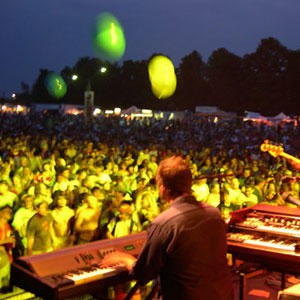 Assembly of Dust (also known as AOD) is an American rock band formed in 2002 by former Strangefolk frontman Reid Genauer. Hearing Assembly of Dust has the flush of meeting a stranger who will inform your life in profound & happy ways, someone whose wise counsel might help you see the world in a fresh light. They possess the same tuneful philosophizing as storytellers like The Band, Paul Simon and Crosby, Stills & Nash, giving the listener good songs playing on a daydream radio.

Hearing Assembly of Dust has the flush of meeting a stranger who will inform your life in profound & happy ways, someone whose wise counsel might help you see the world in a fresh light. They possess the same tuneful philosophizing as storytellers like The Band, Paul Simon and Crosby, Stills & Nash, giving the listener good songs playing on a daydream radio.

Led by Reid Genauer, they make great homespun music. Parts are gentle and tempered with an earthy wisdom that understands whiskey and tears are often the best cures. Other moments find a more forceful voice supported by top-notch musicianship & blistering emotion. Formed in 2002 after Genauer left cult jam stars Strangefolk, AOD is made up of some of the finest East Coast musicians going. Along with Reid's perfect pop vocals and acoustic guitar, there's keyboardist and co-songwriter Nate Wilson, bassist and backing vocalist John Leccese, drummer Andy Herrick, and guitarist and backing vocalist Adam Terrell. Together, it's a holy sound that speaks to modern life amongst tall buildings and cell phones.

The result is a collection of beautifully constructed songs where each chorus and verse is right where it needs to be. The songs are played with professional flair and electric country kick. You can hear how their sound has quickly coalesced into some of the purest organic pop out there today on their second album, The Honest Hour (Hybrid Recordings). Taken from an early 2004 show at Revolution Hall in Troy, NY, it betters many studio releases in its pristine production and carefully nuanced performances. The single Man With A Plan hit the Top 40 on AAA radio charts and was nominated for a Jammy Award. The album also breaks with live tradition by featuring mostly brand new material as opposed to just a rehash of old songs.

The sharply tuned, kinetic energy one picks up on during The Honest Hour is evident in every AOD live show. The band made their Bonnaroo debut in 2005 and received high marks from critics & fans, as well as having their whole set broadcast on XM radio. Other radio nods include an appearance on the celebrated World Caf with David Dye that ran on NPR stations nationally and a Sirius in-studio session from Summer 2005.

A growing following has them selling out legendary venues like the Knitting Factory in NYC, Higher Ground in Vermont, and the Paradise in Boston, where they were also nominated for a 2005 Boston Music Award.

They've shared a stage with members of such luminaries as Phish, The Allman Brothers, The Grateful Dead, The Talking Heads, Cake, Spearhead, Keller Williams, Edie Brickell, Peter Rowan, and Chuck Berry. Their thoroughbred rock n roll pedigree that has earned them spots on bills with Ratdog, The Dead, Bruce Hornsby, The Who, Susan Tedeschi, David Crosby, and Govt Mule.

The road figures prominently in their work, and one feels all the miles they've traveled in the maturity and impact of their delivery. As Genauer is singing and searching for himself, the listener gains fresh perspectives on their own journey. Sung in a voice as pure as anything rock has ever produced, this music is, in the words of Dirty Linen magazine, surprising, exciting, and satisfying. These are tall tales grounded in universal truths, enlightened folklore for today's 9-to-5 denizens. One has to look back to albums like the Grateful Dead's American Beauty & Workingman's Dead, Paul Simon's One Trick Pony, and the Steve Miller Band's Brave New World to find anything like the Assembly of Dust. They share the spirit of the greats in a framework of something new, a vital body with many more honest hours to come in the years ahead.