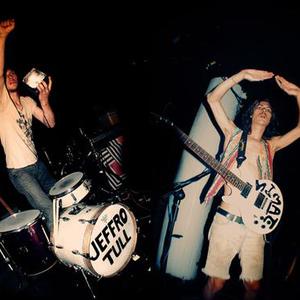 JEFF the Brotherhood is Jake Orrall and Jamin Orrall , two brothers that play drums and guitar. They grew up in Tennessee making music and trying to have a good time. Since their inception they have been playing anywhere from house parties to rooftops, backyards, bars and art galleries and releasing their own records, tapes, comic books and home made videos. The Brotherhood has been called "kraut punk", "psychedelic grunge" and "noise pop" drawing comparisons to bands like Hawkwind, Wipers, and early Sonic Youth.

The Brotherhood has been called "kraut punk", "psychedelic grunge" and "noise pop" drawing comparisons to bands like Hawkwind, Wipers, and early Sonic Youth.

They have been carrying their heavy damage all over the country since 2006 and have shared bills with Oneida, Battles, Sonic Youth, Ex-Models, Jay Reatard, Black Pus and Dave Cloud. Their "we'll play anywhere" attitude and frenetic live shows have earned them near legendary status in the clubs and basements of Nashville and beyond. With three guitar strings and a minimal drum kit, they manage to distill rock to its primal essence.

They released two split seven inches in 2009, one with Sisters from Brooklyn and the other with Screaming Females from New Jersey. Their first full length "Heavy Days" came out in October 2009 on their family run record label Infinity Cat Recordings.

JEFF the Brotherhood's big-label debut, Hypnotic Nights, was produced by Dan Auerbach of the Black Keys.

Wasted on the Dream

We Are The Champions