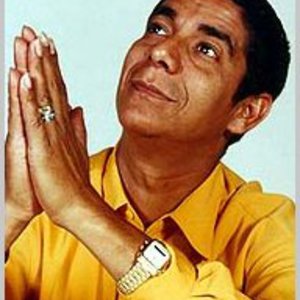 Zeca Pagodinho (b. February 4, 1959, birth name Jess? Gomes da Silva Filho) is a Brazilian singer and composer working in the genres of samba and pagode. Born in the neighborhood of Iraj?, Rio de Janeiro, Zeca Pagodinho grew up around the most traditional types of samba and started making his own verses while still a kid. In the '70s, Zeca started frequenting the Carnival Block of Cacique de Ramos, which took place in Rio de Janeiro every Wednesday and became a true pagode venu (pagode is a type of samba).

At one of these jams, samba singer Beth Carvalho was impressed with Zeca's skills and invited him to record the song "Camar?o Que Dorme a Onda Leva". From that point on, Zeca began to record his own albums. There are now 15 of them, and four DVDs. His creative, joyful, malicious songs translate the day-by-day of the typical easygoing carioca (citizen or Rio) and are a big success in Brazil. He's one of the biggest-sellers in the country.

One of Zeca's first hits is SPC and it appeared on his first album. The SPC (it stands for Credit Protection Service) is a blacklist of bad debtors from which it is hard to get one's name removed . The song, a partnership between Arlindo Cruz and Zeca, tells the story of someone who asks a friend (or partner) to use their credit card on his behalf; afterwards, the relationship breaks up. Both of them are poor.