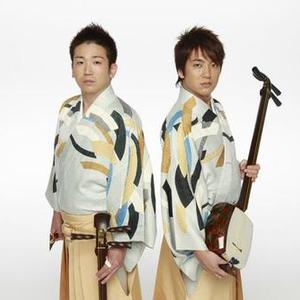 The Yoshida Brothers [aka????] were born and raised in Noboribetsu, Hokkaido. Each picked up the shamisen at the tender age of five and began studying tsugaru shamisen under Takashi Sasaki I in 1990. After sweeping prizes at national Tsugaru shamisen conventions, the brothers made their major debut in 1999. The debut album sold over 100,000 copies, an extraordinary figure for a traditional folk music release.

In 2002, the brothers went on their first national tour entitled "Live Soul" performing in 30 cities. The following year they made their US debut with album Yoshida Brothers from Domo Records and performed in New York and Los Angeles.

International release followed in Korea in 2004 where they had performed their first concert in Seoul in addition to the domestic tour that included 28 cities. In the meantime, they released their second US album, YOSHIDA BROTHERS II, and went on a US promotional tour, visiting seven cities. It was a year of significant breakthrough, with participants from other various projects such as an international exchange event in Sweden and a TV commercial in Japan.

In 2005 the brothers recorded an album in Los Angeles followed by a West Coast tour and a concert in Hawaii. In 2006, they toured the US, Spain, and Hong Kong. In Hong Kong they released their very first greatest hits album in their career and marked favorable sales. Domestically, they launched a shamisen-only national tour. And in 2007, their music created buzz in the US as their music was used in the TV commercial of Nintendo's Wii. The end of that year, the brothers record their much-anticipated album in U.S. that is yet to be released.

In 2008, they released album "Best of Yoshida Brothers" and toured in US and Canada.

As one of the artistic groups whose scope of activities go way beyond that of traditional Japanese music, the Yoshida Brothers continue to take not only Japan but also US, Europe, and Asia as their stage. Their future activities are all the more looked forward to.